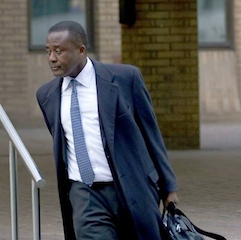 A Ghanaian and former Goldman Sachs banker Elias Preko was sentenced to 4-1/2 years in prison by a London court on Monday for laundering $5 million on behalf of James Ibori, the former governor of Nigeria’s oil-producing state of Delta.

Ibori is serving 13 years in a British jail after pleading guilty last year to 10 counts of fraud and money-laundering. He is the most senior Nigerian politician to be held to account for the corruption that has blighted Africa’s most populous country and top oil producer, where the case is being closely watched.

Harvard graduate Preko, 54, became the fifth of Ibori’s associates to be jailed for assisting his corruption after the ex-governor’s wife, mistress, sister and lawyer were all convicted by British courts in previous trials.

The cases have been tried in London because some of the money was laundered in Britain and some of the defendants were based there. Attempts by Nigeria’s own anti-corruption agency to prosecute Ibori, dating back to 2007, have foundered.

A jury at London’s Southwark Crown Court unanimously convicted Preko, a Ghanaian national, of two offences of money-laundering between March 2003 and April 2008 when he was arrested.

He was charged with assisting Ibori in channeling stolen money through a web of offshore trusts and shell companies.

Preko had left Goldman Sachs before he committed the offences and the bank is not accused of any wrongdoing. The court heard Preko tried to open accounts on Ibori’s behalf when he still worked there but this was not authorized by the bank.

The Delta governor from 1999 to 2007, Ibori was in his heyday a power broker at the heart of Nigeria’s ruling party. After he left office and lost immunity from prosecution his fortunes ebbed and flowed according to political developments in Abuja until he was extradited from Dubai to Britain in 2011.

“The evidence against you in this case was very clear. You knew what Mr. Ibori was doing and you were actively assisting him,” Judge Anthony Pitts told Preko in his sentencing remarks.

“You are a man of considerable ability and intelligence, highly educated, capable of making lots of money perfectly legitimately.”

The court had heard that in a decade at Goldman Sachs, where he was in charge of private clients in sub-Saharan Africa, Preko had made $12 million in salary and received a severance payment of $3 million when he left the bank.

“You had the ability to walk away (from Ibori). You chose to involve yourself with him as a professional man, against the code of upstanding conduct for men in your position,” Pitts said.

The judge noted that the sums Preko had helped launder were “relatively small amounts in a case where the amounts are almost beyond belief”.

Ibori’s total fortune is not known. During his sentencing in April 2012 Pitts put the amount of stolen money covered by his guilty pleas at 50 million pounds ($82 million) but said this may be a “ludicrously low” fraction of his total booty.

In a three-week hearing this year prosecutors sought a court order for the confiscation of 90 million pounds in assets that they said were the proceeds of Ibori’s crimes, but the hearing ended inconclusively and will restart next year