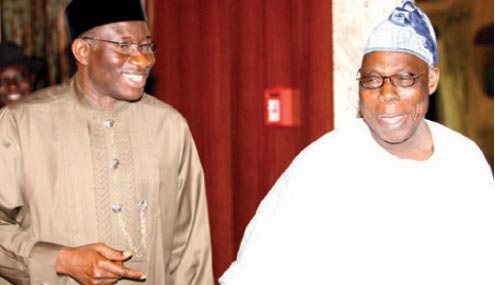 Activists, lawyers and others have likened former President Olusegun Obasanjo’s letter bombing President Goodluck Jonathan as that of a pot calling kettle black, saying the former leader is guilty of the same offence.

Obasanjo had in an 18-page letter accused Jonathan of plunging the nation into darkness.

He accused President Jonathan, among others, of promoting corruption, ethnicity; having a killer squad; tackling Boko Haram with kid gloves and aspiring for a second term in office when he said he will only run for a single term.

Reacting to Obasanjo’s letter, National Publicity Secretary, Afenifere, Yinka Odumakin, said Obasanjo was as guilty as Jonathan as he did worst things than President Jonathan when he was in power.

“Nigerians should be weary of Obasanjo whenever he said something; it is either he is trying to settle scores, even though Jonathan is facing challenges,” he said.

Odumakin urged Nigerians not to allow Obasanjo to deceive them with his frank talks as whatever he did “is self-serving but that does not mean Jonathan should not address corruption.”

“The ICPC under Obasanjo was underfunded. The EFCC under him was used to suppress the voice of political enemies. Obasanjo came to power with less than N20,000 and left power as a multi-billionaire,” he said.

According to him, “Obasanjo has no moral right to criticise Jonathan even though things are bad with this government. He should keep quiet and allow people with integrity to talk.”

A member of the House of Representatives, Lanre Odubote said Obasanjo is not different from Jonathan as the former president promoted the culture of lawlessness and impunity.

“They are birds of the same feather. He is only talking now because he has misunderstanding with the president but this is good for our democracy,” he stated.

Activist, Bamidele Aturu described Obasanjo’s letter to Jonathan as damning, saying what the former president had revealed was what Nigerians already knew.

“The letter shows there is a big crisis now and it is time for Nigerians to act to change this government. This is not a matter of pot calling kettle black, they are all black. What they are saying is that they cannot deliver.

“Obasanjo made valid points in his letter to Jonathan. These people are incapable of governing this nation. Our president is now dishonourable, corruption is high and it is time to purge the system,” he said.

“Jonathan is highly disturbing and has contradictory character. He made promises and will not fulfil and it is better they call him to order.

“He renerged on agreement to run for only one term. Jonathan is misleading the PDP. For five governors to defect from a party, that has never happened. 2015 may not be what it should be,” he stated.

A civil society activist, Biodun Sowunmi, said the letter showed that it had reached the point where people within the Peoples Democratic Party, PDP, have become frustrated about the style of the President they installed in the country.

“With the unprecendented level of corruption, even Obasanjo, a sinner, knows that a greater sinner is in power. Obasanjo is worried that Jonathan is bleeding the country to death.

“The government has suddenly become inept and rudderless and this should make people like Obasanjo worried even though he shares from the blame of forcing Jonathan on us,” he said.

The content of the letter, according to him, is a summary of the frustrations among Nigerians conveyed by just one person.

A member of the Lagos State House of Assembly, Ipoola Omisore, said Obasanjo only expressed his frustrations in the letter to Jonathan.

“Obasanjo has no moral right to condemn Jonathan. Jonathan was a docile Deputy Governor in Yenagoa, Bayelsa State, when Obasanjo used him to displace the then Governor Dipreye Alamieyeseigha and also used him to defeat Atiku by pairing him with the late Umaru Yar’Adua against the PDP’s choice of Donald Duke and Peter Odili.

“You remember this same Obasanjo backed Shagari against Obafemi Awolowo. He has been giving us presidents we do not want and the result is what Nigeria has become today,” he said.

Omisore further stressed that every sin he accused Jonathan of committing, he also committed during his era as President.

“During Obasanjo’s time, he never forgave anybody, he played god, he wanted third term, he seized federal allocation to Lagos, he used the Economic and Financial Crimes Commission, EFCC, against his perceived enemies and many more,” Omisore said, adding that he did what he did because he witnessed the recent encomiums poured on late Nelson Mandela of South Africa.

“If Nigeria should collapse today, Obasanjo should be blamed. I just pray he quit politics quickly and repent so that he does not pay for his sins,” Omisore said.

Another lawmaker, Olumuyiwa Jimoh, said the PDP can no longer hide the fact that there are serious crises within the party threatening to devour it.

NBA Chairman, Ikeja Branch, Barr. Onyekachi Ubani, in his own comment stated: “ Obasanjo cannot be exonerated from the problem at hand because he was the person that forced President Goodluck Jonathan on Nigerians. But he must be commended for coming out with this at this time. The allegations and level of corruption contained in that letter are what people like us already knew. Every Nigerian knows that this government is monumentally corrupt, but for someone like Obasanjo who is a member of the same political party with the president to come into the open with this allegation clearly justifies what everybody has always known. I must say that the allegations he made are very grievous and must not be swept aside. The information in the letter must be used to nip the destruction of this country in the bud.”