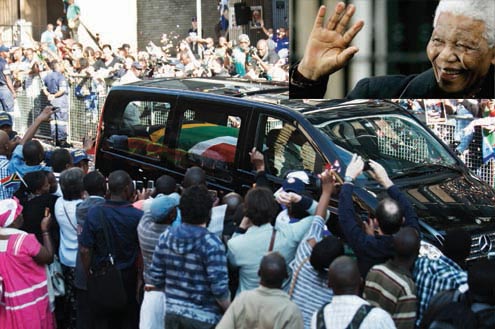 South Africans queued Friday for a final chance to say a personal farewell to Nelson Mandela, with some camping overnight for his last day of lying in state.

Friday was the last of three public viewing days, before Mandela’s casket is removed and transported to his boyhood home of Qunu in Eastern Cape province for burial on Sunday.

Tens of thousands had lined up on Thursday, but many were turned away as the system was unable to cope with the vast numbers of people wanting to pay their final respects.

Stanley Luvhimbe, 40, who had driven 450 kilometres from Thohoyandou near the Zimbabwe border on Wednesday, said he was determined to get in after two days of frustration.

“It’s a once-in-a-lifetime opportunity. We will never see him again. He is my hero,” Luvhimbe.

Mandela’s casket is scheduled to be flown to Qunu early Saturday morning, a day before the actual burial on his family’s estate.

Thousands of high-profile mourners, including numerous political figures, are expected to descend on the remote location which workers have been busy preparing for a week.

According to government officials, the venue will accommodate some 5,000 people.

Meanwhile, the South African government has stated that the burial of the global icon will be strictly private affair of the Mnadela family.

South Africans will not be able to see Nelson Mandela’s remains being laid to rest.

Once the initial public service has been completed, however, the moment of interment will, at the family’s request, be a purely private affair, spokeswoman Phumla Williams told AFP.

“The family has indicated they want to make the burial a family matter,” Williams said.

A special stage and marquee have been erected for the two-hour public funeral service which begins at 8 a.m. (0600 GMT) on Sunday.