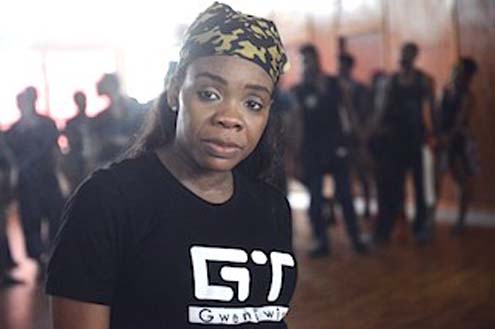 Nigerian dancer and choreographer Kafayat Oluwatoyin Ameh, otherwise known as "Kaffy", attends a rehearsal at her dance school in Lagos in November 19, 2013. Interest in the performance arts has increased in Nigeria, which is investing heavily in developing the sector, recognising that a more professional approach could make it more internationally successful, providing jobs and -- hopefully -- prosperity for those that work in it. The World Bank is backing a government drive to boost the sector, which has seen $200 million (147 million euros) pledged to help boost the country's popular film industry, Nollywood. It is thought that properly run, Nollywood alone could support an estimated one million new jobs. AFP PHOTO/ PIUS UTOMI EKPEI

Drenched in sweat from an energy-sapping rehearsal at a Lagos dance studio, Rita Adoh hopes to make a fortune from dancing and catapult herself into the growing ranks of Nigeria’s millionaires.

“From dancing, I get money to pay my school fees and other bills. I have property and I have helped my parents financially to put up their residential building in Lagos,” the 26-year-old told AFP.

“I plan to open a dance school in the future. It is a dream and I know it will not die.”

Adoh’s choice of career may seem unusual given that she is also studying for a degree in international relations.

But it is a reflection of an increased interest in the performance arts in Nigeria and a sign that the country is getting serious about its entertainment industry.

Nigeria is investing heavily in developing the sector, recognising that a more professional approach could make it more internationally successful, providing jobs and — hopefully — prosperity for those that work in it.

The World Bank is backing a government drive to boost the sector, which has seen $200 million (147 million euros) pledged to help boost the country’s popular film industry, Nollywood.

It is thought that properly run, Nollywood alone could support an estimated one million new jobs.

Rita, who trains with Nigeria’s best-known dancer and choreographer, Kafayat Oluwatoyin Ameh or “Kaffy”, is part of the process, eyeing a career in entertainment as a viable and potentially money-spinning choice.

She admitted, though, that her Roman Catholic parents were strongly against her dancing when she first started, reflecting traditional feelings that study and hard work are the path to secure a steady, well-paying job.

“At the beginning, my parents were opposed to it. But today, their attitude has changed towards it when good things started happening to me and they have benefited from the spin-off,” she said.

Nigerians’ new-found interest in entertainment can also be seen in the huge success of a number of television talent shows, which follow the format made popular in places such as Britain and the United States.

“I would like to make a lot of money, in fact millions, from dancing,” said Victor Okunbor, 19, who has recently left college and started dance lessons.

“I expect dancing to fetch me money and fame,” chipped in Chimelie Okeke, a 20-year-old university undergraduate.

“I currently generate some little money from dancing and I see my current training under Kaffy as a good platform to realise my dream.”

Okunbor and Okeke’s attitude is a common one, reflecting a desire to show off hidden talents and try to get their name in lights.

But in places such as Nigeria, where poverty is widespread, the stakes are a lot higher, with success in such shows a potential escape from the rigours of daily life.

Last year, an eight-year-old girl became an instant celebrity after dancing her way to the 10-million-naira ($63,000, 46,500-euro) top prize on the first “Nigeria’s Got Talent” show, beating a host of older dancers, singers, magicians, comedians and gymnasts.

The 25-year-old agronomy student was at the time kicking his heels because of a nationwide pay dispute between university lecturers and the government.

At dance schools like Kaffy’s, more young people are seeking tuition, either to help supplement their existing income or win richer glories.

But Anna Okorejior, an 18-year-old ICT engineering student, said dancing also has another purpose — keeping young people on the straight and narrow.

“More and more youths are going into dancing and other forms of entertainment now because they keep them busy in doing positive things,” she said.

“For the youths, dancing is better than going into vices such as robbery, drugs, prostitution, fraud and vices.”

Bosun Adekogbe, a music teacher at the Obafemi Awolowo University in southwest city of Ile-Ife, agreed.

He dated the rise in dancing as a career choice back to the 1970s, when musician King Sunny Ade began using dancers in his live shows.

“It is better than armed robbery or joining the ‘yahoo boys’ (scammers).”