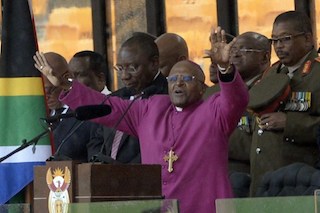 South Africa's archbishop emeritus and honorary Elders, Desmond Tutu, gestures while delivering a speech during the memorial service: he will miss his friend's burial Sunday in Qunu

South African peace icon Desmond Tutu, openly critical of the government and members of Nelson Mandela’s family, said Saturday he was not invited to his old friend’s burial.

“Much as I would have loved to attend the service to say a final farewell to someone I loved and treasured, it would have been disrespectful to Tata to gatecrash what was billed as a private family funeral,” Tutu said in a statement.

“Had I or my office been informed that I would be welcome, there is no way on earth that I would have missed it.”

Staff said the retired archbishop cancelled a Friday flight to the Eastern Cape, where the funeral will take place on Sunday, “after receiving no indication that his name was on any guest or accreditation list”.

Tutu’s account of events was at odds with that given by the government of President Jacob Zuma, which the clergyman has criticised repeatedly, and publicly.

Amid an outcry, the presidency insisted the anti-apartheid campaigner was on the list of invited dignitaries.

“He is definitely on the list,” presidential spokesman Mac Maharaj told AFP, saying he was “taken aback” by claims that the Nobel laureate fondly known as the “Arch” was not invited.

“The Arch is not an ordinary church person, he is a special person in our country,” said Maharaj, promising to correct any misunderstanding that may have arisen.

“With funerals they (government) don’t send invites (but) they do have a list of accredited people,” she said.

“If he had called, we would have given him accreditation… they would never have turned Tutu away… there were no malicious shenanigans.”

Tutu, who retired in 2010 but is still regarded as a moral beacon for South Africa, like Mandela, has been openly critical of Zuma’s graft-tainted administration.

He has a long history with the ruling African National Congress (ANC) of Mandela and Zuma, and presided over the funerals of famous struggle activists including assassinated communist stalwart Chris Hani and former party leader Walter Sisulu.

But relations have soured, and the popular clergyman was also left off the official programme for a mass memorial service held for Mandela in Soweto on Tuesday, attended by nearly 100 world leaders.

Tutu, who baptised South Africa the “Rainbow Nation”, declared in May that he would no longer vote for the ANC because of “the way things have gone”.

He had recently pleaded with Mandela’s family not to “besmirch” the icon’s name after some relatives became involved in a public spat over the Mandela burial site.

And in 2011, the outspoken Tutu blasted Zuma’s administration for being “worse than the apartheid government” after it failed to issue the Dalai Lama a visa to attend his 80th birthday — vowing to pray for its downfall.

“He was a part of the struggle like Madiba. He knew him very well.”

“This is a state funeral, it’s not an ANC funeral,” the party’s secretary general Gwede Mantashe told AFP.

Mandela spent his first night as a free man at Tutu’s home in 1990 after his release from 27 years in prison.

The two men remained close over the years.

Mandela appointed him to lead the Truth and Reconciliation Commission to probe apartheid-era wrongs, and has said that Tutu’s contribution to the country was immeasurable.

The Dalai Lama, another friend of Mandela, will also not be attending the burial, having twice failed to obtain a visa for South Africa since 2009.