Mandela completes journey---back where he began 95 years ago 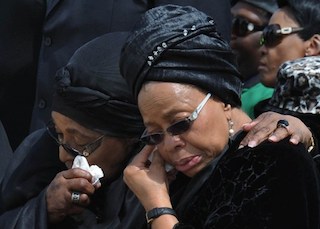 Ex-wife of Nelson Mandela, Winnie Mandela Madikizela (L), and his widow Graca Machel wipe their tears upon their arrival with the reamins of South African former president Nelson Mandela at the airport in Mthatha on December 14, 2013. AFP

Nelson Mandela’s remains were returned to his beloved rural childhood village ahead of a traditional burial on Sunday, the final leg of his exceptional 95-year journey.

A funeral cortege with his flag-draped casket entered on Saturday the gates of Mandela’s homestead in the remote village of Qunu, accompanied by a phalanx of military vehicles.

Mandela will be buried near the homestead, ending 10 days of national mourning and global tributes for the prisoner-turned-president who transformed his country and inspired the world.

“We are going to miss him so much,” said Lusanda Shasha, 17, as the cortege drove out of view.

Sunday’s funeral will begin at 8:00 am (0600 GMT) with a two-hour ceremony for 5,000 people, including foreign dignitaries such as Britain’s Prince Charles.

But Mandela’s friend and fellow Nobel peace laureate Desmond Tutu is unlikely to be there, the archbishop’s office said Saturday. Tutu has been openly critical of the government and members of Mandela’s family.

“Had I or my office been informed that I would be welcome, there is no way on earth that I would have missed it,” Tutu said in a statement.

The homecoming of Mandela’s body was greeted by thousands of waiting mourners and a full military guard of honour.

A sombre mood soon changed to cheers as the crowd — many dressed in free T-shirts bearing Mandela’s face — welcomed the return of their hero with joy and pride.

Military personnel lined the route, along with small groups of people singing anti-apartheid songs and songs in praise of the iconic statesman.

“He is finally coming home to rest, I can’t even begin to describe the feeling I have inside,” said 31-year-old Bongani Zibi.

“Part of me is sad but I’m also happy that he has found peace.”

Sunday’s interment will see Mandela laid to rest in the open spaces of the village that he so longed for during his years in apartheid prison.

Since Mandela died on December 5 at his home in Johannesburg, South Africans have turned out in the pouring rain and blistering sun to pay their respects.

Tens of thousands had packed a soaked stadium in Soweto for a memorial service Tuesday and up to 100,000 people filed past Mandela’s open-casket for the three days it was displayed at the Union Buildings in Pretoria — the same venue of his presidential inauguration two decades ago.

There were scuffles Friday on the final day of the lying in state, as police had to turn away tens of thousands of frustrated mourners who were unable to get in to view the body.

Mandela’s casket left Pretoria with a send-off organised by the ruling African National Congress (ANC) which he once led.

“Yes we are free but the challenge of inequality remains,” Zuma said, citing the twin blights of poverty and unemployment on the country’s economic progress.

“We would like to say, go well Tata (father). You have played your part and you have made your contribution,” he added.

Mandela’s grandson Mandla recalled how as a young child he would hear people in the then blacks-only township of Soweto shouting Amandla! (power) and “Viva Mandela”.

“I thought I must be a very popular kid,” he joked.

The burial itself will be a strictly private affair, barred to both the public and the media, on the wishes of the Mandela family.

The funeral will be held according to traditional Xhosa rites overseen by male members of Mandela’s clan.

The slaughtering of an animal — a ritual performed through various milestones of a person’s life — will form a crucial part of the event.

During the ceremony, Mandela will be referred to as Dalibhunga, the name given to him at the age of 16 as he entered adulthood.

Although Mandela never publicly declared his religious denomination, his family comes from a Methodist background.