The first daughter of former President Olusegun Obasanjo, Iyabo, has ruled out further communication with her father till death, describing him as a liar, manipulator, megalomaniac, narcissistic, two-faced hypocrite determined to foist on President Goodluck Jonathan what no one would contemplate with him as president.

The Vanguard Online published today an 11-page open letter written by Senator Iyabo Obasanjo to her father, in which she painted a very unwholesome intimate portrait of Nigeria’s leader, accusing him “of having an egoistic craving for power and living a life where only men of low esteem and intellect thrive.” 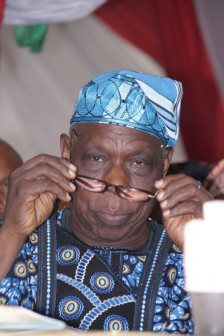 Obasanjo: called a megalomaniac by daughter

Contrary to Obasanjo’s denial that he did not seek a third term, Iyabo, the Vanguard reported accused her father of orchestrating a third term for himself as president, cruelty to family members, abandonment of children and grandchildren, and also, a legendary reputation of maltreatment of women, including the mother.

Iyabo who foreclosed further political engagements in Nigeria denied any political motive for her missive, and described Nigeria as a country where her father and his ilk have helped to create a situation where smart, capable people bend down to imbeciles to survive.

“For you to accuse someone else of what you so obviously practiced yourself tells of your narcissistic megalomaniac personality. Everyone around for even a few minutes knows that the only thing you respond to is praise and worship of you”, she wrote in reference to Obasanjo’s letter 2 December to President Goodluck Jonathan.