No "Merry Christmas" in the Holy Lands 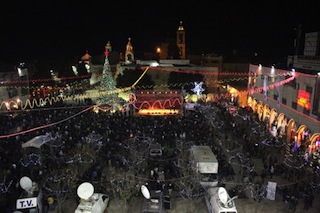 File Photo: A view of the Manger Square in Bethlehem: where it all started too millenia ago

Many people around the world have commenced the celebration of Christmas by wishing their family members, friends and colleagues “Merry Christmas”. In the holy land where one still finds today communities of faith that stretch back thousands of years to the very beginnings of the church, there will be Christmas, but sadly it will not be merry. For this diminishing community of Palestinian Christians who bear witness to two millennial of continuous Christian presence in the land called “holy” by much of the rest of the world, life will be hard and tough as usual under the Israeli occupation. There is no difference of opinion that what exists in the occupied territories is akin to apartheid and if only a few days back, the entire world celebrated the life and times of Dr Nelson Mandela, who worked hard to break the shackles of the tyranny of apartheid on his people, the same people across the world should not stand by as the entire Palestinian people are subjected to worse conditions (worse by the accounts of some of the prominent leaders of the South African anti-Apartheid movement).

The World Conference against Racism (WCAR), an international event organized by UNESCO, in the edition held in Durban from 31 August until 8 September 2001 (titled “World Conference against Racism, Racial Discrimination, Xenophobia and Related Intolerance”), declared the Israeli state policy of Zionism, and treatment of the Palestinians as racism. On October 4, 2006, a galaxy of 135 former presidents, prime ministers, foreign and defense ministers, congressional leaders and heads of international organizations issued a joint call for urgent international action to end Palestinian misery. In their statement they declared that the conflict must immediately be settled in order to assure “security and full recognition to the state of Israel within internationally recognized borders, an end to the occupation for the Palestinian people in a viable independent, sovereign state, and the return of lost land.”

Times like these remind us of the commonalities of our religious heritages, both of which hold the life of Jesus Christ (AS) to be an example for humanity. The Qur’an states “Behold! The angels said: ‘O Mary! God gives you glad tidings of a word from Him. His name will be Jesus Christ, the son of Mary, held in honour in this world and in the Hereafter and in the company of those nearest to God.'”

This Christmas will once again be a sad reminder to the world and especially the Palestinian Christians that the holy land, our common religious and spiritual epicenter, remains in the grip of strife and tyranny. Roughly half of Bethlehem’s residents are Christian. Many people do not know that Bethlehem, the biblical birthplace of Jesus Christ is a Palestinian city with a mixed Christian-Muslim community, lying in the occupied West Bank territory.

U.N. reports indicate that Bethlehem has become isolated due to the policies of occupation forces. The report states that the spiritual, cultural and economic links between Bethlehem and Jerusalem, located just a few kilometres away, are nearly severed due to the construction of Israeli settlements around the city. Other reports and survey also indicate that 78% of Christians blame the ongoing exodus of Christians from Bethlehem on the Israeli occupation and travel restrictions on the area Israel has erected physical barriers, restricted travel on roads to Israelis, and has intensified its policy of restricting the movement of Palestinian civilians. Despite international regulations requiring Israel to ensure access to Christian and Muslim holy places that are under its control, for over 10 years, Christians in Palestine have been prevented from freely entering the Church of the Holy Sepulchre in Jerusalem for worship, and during Christmas, many in Bethlehem are prevented from travelling to Jerusalem.

For generations, pilgrims wanting souvenirs have bought olivewood in Bethlehem shops selling olivewood in manger scenes. However, many of these olivewood stable shielding the baby Jesus, Mary and Joseph are now gone. In their places, looming over the angelic family, are Israeli watchtowers and towering sections of an adjoining wall. Bethlehem is now like a small prison, everywhere you look, there are walls. For the Palestinian Christians of Bethlehem, travelling the 10 kilometres distance to Jerusalem’s Old City is impossible without special permission.

As Bethlehem groans under Israeli occupation, Israel continues to plan how to expropriate more Palestinian lands, claiming that the land is needed for “security.” (If it was for security, they simply should use their own land!). Yet the very taking of that land is the cause of much of the resistance from Palestinians, who are Christian and Muslim, who have had enough and continue to fight back in the only way they know how. These policies not only curtail the freedom to worship, they have also had devastating economic consequences for Bethlehem and the rest of the occupied territories. Bethlehem’s economic life has become largely stagnant due to the city’s isolation, and is riddled with boarded-up shops and abandoned development projects. Its people are routinely attacked and humiliated at illegal checkpoints.

While these abominations are ongoing, many people throughout the world are already taking a pause from their daily routines to immerse themselves in the spoils of good fortune, buying presents and expensive gifts and new flat screen TVs, an X-Box video games for kids, and new cars and vacations for spouses, and commercialized crap in a feast of greed that contradicts the very foundation of their beliefs.

The Western, corporate-dominated media (most of which justifies Israel’s violence in a manner that de-contextualizes Palestinian militancy) will start to report that Israel will ease restrictions on travel to Bethlehem over Christmas as it does every year, and that it will be giving candy to pilgrims who are stopped at checkpoints. It must be noted that such gestures are little comfort to Palestinians who live in the area all year long, and who remain under siege by occupation forces. Many of the visiting pilgrims will be fanatical American evangelical Christians who, being Zionists, believe that supporting Israel is a biblical imperative, and they flock to the holy land in record numbers to offer their supports to their Israel. The pilgrims tour the Jewish and Christian quarters of Jerusalem’s Old City. They parade through its streets to demonstrate their solidarity with Israel. They visit Galilee, the main locale of Jesus’ ministry. They give hundreds of millions of dollars each year to projects in Israel including construction of illegal settlements on expropriated lands and, together with Zionist lobbies in America, determine a foreign policy that ensures U.S. continues to finance this structure of violence and death to the tune of more than 100 billion dollars. Democrats and Republicans one-sidedly support Israel, seek dominance over Middle East states, they want a subservient Hamas like Fatah and have the tacit supports of repressive Arab kings that pay only lip service to the dismantling the cruel policy of occupation. These American evangelicals rarely seek out Palestinian Christians nor care about the erosion of Christianity from its birthplace. The limitation on the freedom of Palestinians, which Israel cites as a security measure, is a form of collective punishment that mainly targets innocent civilians. More importantly, restricting the movement of Palestinians also results in the violation of one of the most sacred human rights: the freedom of religion. Like their Muslim neighbours, who are prevented by checkpoints and roadblocks from making pilgrimage to the Al-Aqsa Mosque in Jerusalem, Christians in the West Bank and the Gaza Strip are denied basic religious freedoms.

Given the inhumane treatments meted out to the Palestinians, the future for Bethlehem residents looks bleak. Israel is, as they remind us often, a “Jewish State” and plans are ongoing to change the facts on ground, even if that entails ethnically cleansing the land of its rightful owners and indigenous population. Despite its propaganda and lies, Israel does not exist in the West Bank which was occupied in 1967, except in the minds and actions of fanatics who oppose peace and who seek to drive all of the Christians and Muslims out of the holy land. Today, all peaceable people around the world must join Christians in Bethlehem and Jerusalem in praying that the devastation and conflict occurring at our holiest sites can be overcome through remembering the significance of Christmas and the life of Jesus Christ. It is tough and hard to be a Palestinian Christian in Bethlehem and Jerusalem or a Palestinian Muslim in the holy land at this time, but frankly it is simply tougher and harder to be a Palestinian in Palestine at any time since the start of occupation.

Many Palestinians will cry out this Christmas again for the suffering of the Christians in the holiest Christian city in the Christian religion. They will cry out and ask why do so many people sit around Christmas trees and pretend to celebrate in the true spirit of Christmas while, for the last 60years, they continue to suffer a terrible injustice, terrible trials and intense stress.