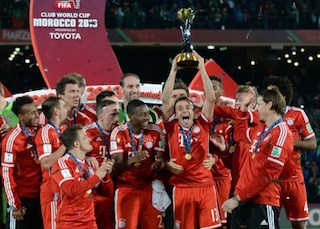 Coach Pep Guardiola has already targeted more silverware for Bayern Munich next year after the European champions claimed their fifth title of 2013 by lifting the Club World Cup.

Bayern’s 2-0 win over Moroccan champions Raja Casablanca in Saturday’s final in Marrakech came at a canter with goals by Brazil’s Dante and Spain’s Thiago Alcantara in the first 22 minutes.

The Bavarians now go on a two-week holiday before their winter breaking training camp starts in Qatar in January as Guardiola looks to fine-tune his all-conquering squad.

“Five titles in one year is a great achievement for Bayern,” said Guardiola, who took charge in June having won 14 titles in four years as Barcelona coach.

“I am very pleased for the club and I am very proud of the players and the fans.

“Now we have a two-week break, then we come back to take on our next challenges.

“We are very excited about our achievements, but I am also looking to the future – 2013 is already behind us.”

This was the third time Guardiola has won the Club World Cup after his 2009 and 2011 successes with Barcelona.

But for his Bayern players, the title of ‘club world champions’ is a welcome novelty.

“We are pleased to be club world champions, it’s a perfect end to an excellent year and a great reward for the way we played,” said Thomas Mueller.

“You can’t get much better in a calendar year.”

After Jupp Heynckes steered Bayern to the treble of Champions League, Bundesliga and German Cup last season, Guardiola has now added the Club World Cup to the UEFA Super Cup that Munich won in August.

Bayern’s success has seen them laughing all the way to the bank in 2013 with 125 million euros (US$171m) of prize money.

The Bavarians are on course to defend the German league title, lying seven points clear with a game in hand at the halfway stage in the season.

They were buoyed before kick-off in Marrakech as news came through that their main Bundesliga rivals Borussia Dortmund and Bayer Leverkusen had both suffered defeats on Saturday to lose more ground.

“It’s too early to talk (about the title) being decided, but it was another absolutely beautiful Saturday for us,” said captain Philipp Lahm.

The 30-year-old had a busy time after the final whistle as he was repeatedly called up to the quickly-assembled stage on the pitch to claim numerous awards.

Lahm ended up collecting the tournament’s Fair Play Award, the silver ball for the second best player – behind winner Franck Ribery – a framed award for the world’s best club and the Club World Cup itself.

“I had to chuckle a bit,” said Lahm who ended up shaking hands with both FIFA President Sepp Blatter and Morocco’s King Mohammed VI four times.

“I am sure one or two of the presentations could have been done together.”

The only dark cloud on Bayern’s horizon for 2014 is the March court case for president Uli Hoeness, who faces allegations of tax evasion.

The 61-year-old is accused of hiding millions of euros from tax authorities in a Swiss account and his trial starts on March 10 in Munich.

With Christmas looming, Bayern chairman Karl-Heinz Rummenigge has said he has “only one wish: that the story with Uli Hoeness has a happy ending.”

Meanwhile, Raja coach Faouzi Benzarti urged his side to do everything to return next year, when the tournament will again be held in Morocco.

“We need to come back down to earth now. There will be a second edition in Morocco next year and we have to win the league and get back there, because it is an extraordinary competition,” said the Tunisian Benzarti, whose side qualified this time around as champions of the host nation.