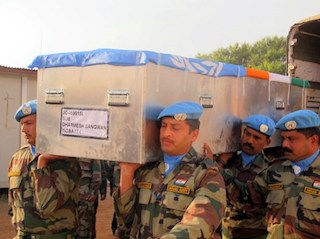 File Photo: UN soldiers carrying the coffin of one of the soldiers killed by Sudanese forces

Envoys from the United States and from Nigeria will fly into Juba Sunday, part of intense diplomatic efforts to avert all-out civil war in South Sudan, an official said.

Donald Booth, the US envoy for Sudan and South Sudan, is expected to arrive later Sunday, an official at the South Sudanese foreign affairs ministry told AFP, adding that Nigeria is also sending in an envoy.

The envoy was not identified.

A group of foreign ministers from east Africa and the Horn wrapped up a three-day mediation bid, during which they met with South Sudan’s President Salva Kiir, on Saturday.

South Sudan’s government on Saturday agreed to talks with Kiir’s rival, deposed vice president Riek Machar, who is now on the run, provided no conditions were attached to the talks.

The chief of South Sudan’s army dismissed claims that his country was on the brink of civil war.

“A civil war will not come. We will avoid it at all costs,” he told AFP late Saturday.

Fighting has escalated steadily in South Sudan since it erupted December 15, with the death toll in Juba alone at more than 500 and tens of thousands seeking UN protection.

The army chief also dismissed rumours that armed youths co-opted to the rebel side could march on the capital in the coming days.

“I don’t think there is anybody … who is coming to attack you. No such thing,” he told AFP in Juba.

He conceded the government has “problems” in two states — volatile Jonglei in the east and oil-rich Unity in the north — but said he was confident of being able “to fix this in a few days”.

Oil companies have started pulling staff out of Unity state after several local oil workers were singled out on ethnic grounds and killed last week, and there has been fighting in and around the state capital Bentiu.

In Jonglei — a remote state already prone to large-scale inter-ethnic fighting, where three US military aircraft were shot at on Saturday as they carried out an evacuation mission — battles have raged in several centres and at least 15,000 people have sought refuge with the UN.

The African Union called on Saturday for an immediate ceasefire.

In a statement, it described the killing of U.N. peacekeepers and civilians at a U.N. camp as a war crime.

Fighting that began on Sunday in the capital Juba has swiftly spread to other parts of the country, fuelled by ethnic divisions between the main Nuer and Dinka tribal groups.

The African Union said in a statement that its chairwoman, Nkosazana Dlamini-Zuma “calls for an immediate humanitarian truce for the Christmas season, as a sign of a commitment by all concerned to the well-being of the people of South Sudan”.

The United Nations has said that about 2,000 ethnic Luo Nuer youths overran a U.N. base in Akobo on Thursday, killing two Indian peacekeepers and at least 11 Dinka civilians who had sought refuge at the base.

The African Union said Dlamini-Zuma was “extremely saddened by the killing of innocent civilians and United Nations peacekeepers in Bor, in the Jonglei State of South Sudan. She condemns these killings as a war crime”.

Two Indian peacekeepers were killed at the UN base in Akobo in Jonglei last week as they tried to protect civilians who had sought shelter there.

“The role of Sudan is to support these countries in achieving stability,” Bashir told a reception for former and current government officials.