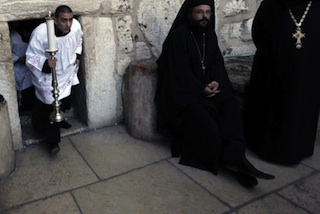 File Photo: An altar boy walks through the door of Nativity in Bethlehem, said to be the birthplace of Jesus Christ, conceived by Virgin Mary

Nearly one percent of young women in a U.S. study who have become pregnant claim to have done so as virgins, according to a report in the Christmas edition of Britain’s BMJ medical journal.

The authors of “Like a virgin (mother)” – whose prose is devoid of irony – say such scientifically impossible claims show researchers must use care in interpreting self-reported behavior. Fallible memory, beliefs and wishes can cause people to err in what they tell scientists.

Based on interviews with 7,870 women and girls ages 15 to 28, 45 of the 5,340 pregnancies in this group through the years – 0.8 percent – occurred in women who reported that they conceived independent of men. The figure does not include pregnancies that result from in vitro fertilization or other assisted reproductive technology.

Each year, the BMJ Christmas edition publishes untraditional science papers. In addition to the report on virgin pregnancies, the latest BMJ includes papers on whether there is a local baby boom nine months after home sports teams triumph (only a small one, but statistically significant) and whether an apple a day would keep the British doctor away (yes, saving about 8,500 lives in the United Kingdom each year, about as many as would expanding the use of cholesterol-lowering drugs to everyone over 50).

For the study of putative virgin pregnancies, researchers at the University of North Carolina at Chapel Hill analyzed data from the thousands of teenage girls and young women who took part in the long-running National Longitudinal Study of Adolescent Health.

The girls were 12 to 18 years old when they entered the study in the 1994-95 school year and were interviewed periodically about their health and behavior over 14 years, including via computer as a way to encourage them to be candid when answering questions about their sexual history.

The 45 women and girls who became pregnant despite, according to what they told interviewers, being virgins at the time of conception differed in several ways from peers who acknowledged that men had had a role in their procreation.

The 45 self-described virgins who reported having become pregnant and the 36 who gave birth were also more likely than nonvirgins to say their parents never or rarely talked to them about sex and birth control. About 28 percent of the “virgin” mothers’ parents (who were also interviewed) indicated they didn’t have enough knowledge to discuss sex and contraception with their daughters, compared to 5 percent of the parents of girls who became pregnant and said they had had intercourse.

The ostensibly chaste mothers were also less likely to know how to use condoms, according to the report. UNC biostatistician Amy Herring and public health expert Carolyn Halpern led the group.

The researchers found that although the mothers in question were more likely to have boys than girls, and to be pregnant during the weeks leading up to Christmas, neither similarity to the Virgin Mary was statistically significant.