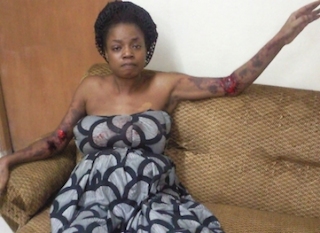 The deposed monarch of the western Nigeria town of Akure, Oluwadare Adepoju Adesina, has urged the government of state of Ondo state to reinstate him as the ruler.

Mr. Adepoju was deposed after revelations that he battered his wife, Olori Bolanle, in May 2010.
His battered wife took ill and subsequently died in July 2011. Mr. Adepoju then relocated to the United Kingdom.

Saharareporters said it is in possession of an 18-page letter written by the former monarch through his lawyer, Barrister Olusola Oke, in which the deposed Deji appealed to Governor Olusegun Mimiko, to return him to the throne.

“I must passionately plead with your Excellence(sic) to remember how well I stood behind you and fought with you towards ensuring that you won the election and to ensure that you also recovered your stolen mandate,” he said.

Recounting how he was deposed from the town because he allegedly poured a concoction on his estranged late wife, Olori Bola Adepoju Adesina, he said the avoidable communication gap was the reason behind the widely-reported incident.

He claimed that the escalated fracas between him and the late Olori was misconstrued by the press which, he also alleged, refused to report his own version of the story.

Dr Ige Ogunleye, the Chairman of the Osupa Ruling house which Adesina hails from, confirmed receipt of the letter, but he declined further comment.

Many sources in the ruling house disclosed that the letter comes at an important time, as the Deji throne is vacant. SaharaReporters had earlier gathered from a kingmaker in the palace that the Osupa Ruling House is the next family to present candidates for the throne.