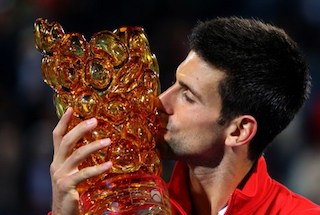 Novak Djokovic started where he stopped last season: by continuing his unbeaten run.

Djokovic, who finished the year with a 24-match winning streak on the ATP tour since losing the U.S. Open final to Rafael Nadal, needed just 82 minutes to dispatch the third-ranked Ferrer in the final of the invitational exhibition tournament.

Ferrer led 4-2 in the first set but then started making a number of unforced errors as Djokovic took control of the match.