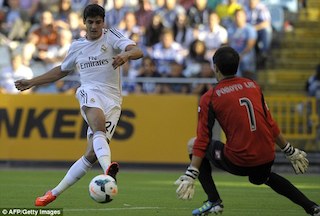 Real Madrid striker Alvaro Morata is the man most likely to join Arsenal in the January transfer window to help support Olivier Giroud up front.

The Mail online reported Sunday that Arsene Wenger will delay making a final decision on whether he needs to boost his squad for the title run-in by taking 21-year-old Morata, who is valued at around £15 million, on loan.

Lukas Podolski’s return from injury means the German could play in a central role if Giroud is injured.

Real manager Carlo Ancelotti has used Morata only sparingly and the club would be happy if he moved to Arsenal for six months on loan.

Morata was the star of last summer’s Under-21 European Championship in Israel, scoring four goals for Spain and winning the Golden Ball as top scorer in the tournament.

He has also scored goals for the Madrid senior team in the few opportunities he has had.