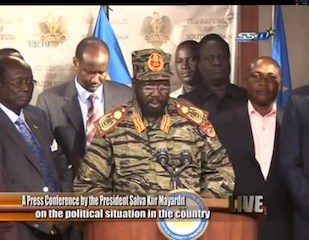 Juba claimed that Machar, the de facto leader of rebels fighting the government, has recruited up to 25,000 young men from his Nuer tribe in the eastern state of Jonglei who they say are “ready to attack any time”.

According to Jonglei’s acting governor Ogato Chan, the Nuer fighters were around 110 kilometres (70 miles) from the state capital of Bor, which was now under the control of government forces.

“The information is that they want to come and attack Bor but I am sure they will not attempt to do it because the SPLA (Sudanese army) forces will repel them back,” Chan said. “Now the army are taking position.”

Rebel spokesman Moses Ruai Lat said Machar was “not mobilising his tribe”, the second biggest ethnic group in South Sudan, describing the men instead as regular soldiers who had rejected the government and were not specifically drafted by Machar.

The Nuer fighters are members of a tribal militia known as the “White Army”, a name synonymous with years of violence and terror during the 1990s civil war.

In 2011 and 2012 the White Army turned on the Murle ethnic group, killing hundreds in a conflict over cattle theft.

The accusations have cast a shadow over peace talks spearheaded by regional leaders to end the bloody violence believed to have killed thousands and which the international community fears could slide into civil war.

Regional leaders at the Inter-Governmental Authority on Development (IGAD) have set Tuesday as a deadline for face-to-face talks between President Salva Kiir and his former deputy to end the fierce battles for control over several strategic oil-producing areas notably in the north of South Sudan.

While the government has said it was willing to observe a ceasefire, Machar has made demands including the release of his arrested political allies before committing to a truce.

Makuei said authorities were only ready to free eight of the 11 detainees linked to Machar, and only once the former vice-president had accepted a ceasefire agreement and talks had started.

UN warns justice will be brought

Fuelled by an old rivalry between the two, the conflict has fanned ethnic differences between Kiir’s Dinka group and Machar’s Nuer clan in the country, which won independence from Sudan in 2011.

Fighting broke out on December 15 after Kiir accused Machar of mounting a coup, which his rival has denied. Rebels swiftly took over several key regional cities including Bentiu, in the northern oil-producing state of Unity, and Bor, which was recaptured by the army.

South Sudan’s army said calm had returned to a number of flashpoint areas in Unity state and the northeastern Upper Nile state, where troops pushed back rebel attacks.

In recent days, grim reports of massacres, rapes and killings nationwide have emerged, with the United Nations reporting the discovery of a mass grave.