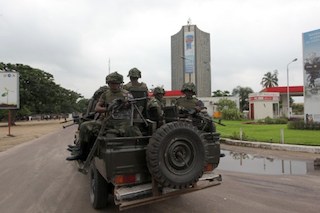 FILE PHOTO: Soldiers of DR Congo on patrol in Kinshasa

KINSHASA(AFP) – Congolese security forces repelled a wave of coordinated attacks in the capital Kinshasa and other cities on Monday, in fierce gun battles that left more than 70 assailants and three troops dead, the government said.

The attacks made airlines to suspend all flights into and out of Kinshasa as the airport was among several high-profile targets in the coordinated attacks by armed rebels against symbols of power in the Democratic Republic of Congo.

Armed youths believed to be loyal to a pastor who challenged President Joseph Kabila in elections seven years ago stormed the state television station, the international airport and the military headquarters.

The rebels also targeted Lubumbashi, capital of the resource-rich southeastern state of Katanga — the economic heart of the country — and the eastern town of Kindu.

“More than 70 attackers were killed, including around 50 in Kinshasa,” government spokesman Lambert Mende told AFP.

“Three of our own were killed in Kinshasa and two civilians were injured,” he added.

Gunfire erupted on Monday morning at the premises of the state broadcaster RTNC near parliament as well as the international airport and the main military base in Kinshasa, causing panic among residents.

A government source later said the situation had been brought under control, but all flights into and out of the capital’s main airport were halted and the United Nations placed its troops on alert.

UN spokesman Martin Niersky said UN troops stationed at the airport had engaged the gunmen at the airport, where a staff member was wounded during the exchange of fire.

“The UN mission in the country, MONUSCO, has taken measures to ensure the safety and security of its staff and placed troops in these locations on alert,” Niersky said in New York.

“A UN staff member was wounded during the exchange of fire at the airport but is in a stable condition,” he added.

“The identity and motivation of the assailants remains unclear at this stage.”

Kinshasa has mostly remained free of the conflicts that have long engulfed the mineral-rich east of the giant African nation.

A television station employee said the hostage takers had claimed loyalty to pastor Joseph Mukungubila Mutombo, one of the candidates who challenged Kabila in 2006 elections. The two men are both from Katanga, where the president was visiting on Monday.

In an open letter dated December 5, Mukungubila expressed bitterness at the way the country was being run and showed his hate for neighbouring Rwanda, which once invaded the DR Congo and is accused by the United Nations of backing rebels.

The pastor charged that Kabila was too close to Rwanda.

Gunfire was heard near Mukungubila’s residence in Lubumbashi on Monday, according to rights group Justicia.

The US embassy said it had “received multiple reports of armed engagements and fighting around Kinshasa”, together with reports of numerous military and police checkpoints and barricades.

Shooting was also heard near the army headquarters known as the Tshatshi camp, residents and a journalist said.

Police officers, soldiers and Kabila’s Republican Guard fanned out across the capital to restore security.

Before the RTNC television feed was cut, two young presenters were seen on screen, appearing frightened but calm, with a young man standing behind them seemingly threatening them.

The assailants “are armed with machetes and guns. They have taken reporters hostage. An operation is under way to dislodge them”, police spokesman Colonel Mwana Mputu told AFP.

“We don’t have the impression that the attackers had any other objective — in such small numbers, with such weak weaponry — but to seek… to spread panic and terror on the eve of the New Year’s festivities,” Mende said once the television link was restored.

The situation in the capital had calmed by the end of the day, although isolated gunshots could still be heard.