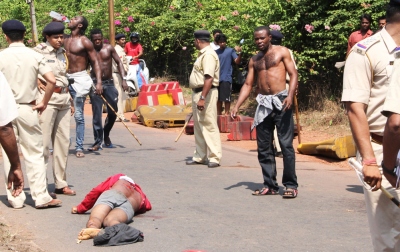 The scene of murder of a Nigerian in Gao: Obodo's lifeless body on the road

Simeon Obodo, the 35-year old Nigerian who was killed in Gao, India, on 30 October, has been buried in his hometown in Obogwe-Umunwaku community in Ohaji/Egbema Local Government area of Imo.

A representative of the family, Mr Ejike Esinkoye, expressed dismay that the Federal Government did not send any official delegation to the burial.

He also said that the family had yet to receive any compensation or assistance from the India government.

The murder of the Nigerian during a violent clash in Goa village, India, sparked a diplomatic row between both countries.

Around 200 Nigerians in India protested Obodo’s murder by blocking a national highway and clashing with locals and police in the area.

Fifty-three of the protesting Nigerians were arrested and later released, after paying fees to secure their release.

On 16 December, Mr Abdulazeez Dankano, the Director, Consular and Immigration Services, Ministry of Foreign Affairs, told NAN that the diplomatic rift between both countries caused by Obodo’s murder, was now “under control’’.

Dankano was part of a Federal Government delegation that visited New Delhi in early December to conclude negotiations on three agreements affecting the welfare of Nigerians in that country.

He said the Indian government had made some arrests in connection with Obodo’s murder but did not say whether the suspects had been charged.

Born on 1 November , 1977, Obodo attended Umunwaku Primary school in Ohaji/Egbema and Umunwaku Secondary School from 1992 to 1998.

According to a biography published by the family, Obodo worked and lived in Port Harcourt before travelling to Liberia in 2009.

Obodo, who left Nigeria for India on 9 January before his death 30 November, few days after his 36th birthday, is survived by an aged mother, daughter and wife.