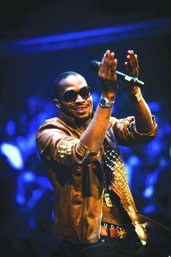 More than 60 top and upcoming Nigerian artistes are getting ready to thrill Lagosians tonight, 31 December at an exclusive star concert taggged Lagos Countdown 2013.

The event end in the earlier hours of tomorrow, 1 January, 2014.

Apart from Tuface Idibia, super producer Don Jazzy and star actress Funke Akindele, who are the other two ambassadors of Lagos Countdown 2013 will also be part of the Crossover gig.

There will also be a battle of notable DJs spinning different tune to thrill distinguished guests including the Lagos State governor, Mr. Babatunde Fashola, SAN, members of the State Executive Council, some traditional rulers and thousands of fun seekers at the countdown.

The Lagos Countdown, which debuted last year, is a world-class celebration of the end of one year and the beginning of another in Lagos State. It was put together by Lagos State Signage and Advertisement Agency, LASAA, and a group of sponsors led by Nigerian Breweries Plc.

It commenced on 7 December and the Bar Beach venue of the event has turned a beehive of major commercial and leisure activities, as it is besieged by thousands of local and foreign visitors every evening.

George Noah, Managing Director, LASAA, stressed that the Lagos Countdown was conceived by the State Governor, Mr. Babatunde Fashola, in order to put Lagos on the global map and be at par with other top cities such as New York, Dubai, Sydney, and other major destinations that commemorate the crossover into the new year.

“LASAA’s aim for the State Government is to leverage the proposition of Lagos State as a premium destination for business and leisure,” Noah said.

Also speaking on the Lagos Countdown 2013, Tokunbo Adodo, Marketing Manager, Star, Goldberg and Export, NB Plc, said it is a special season for their consumers every year, and the company is happy to be a part of the experience counting down to the new year.

“We are thrilled at the reception received on our first day of the official Countdown, seeing everyone having a great time and eager to know what STAR has to offer. Yes, there’ll be plenty of other surprises so they can be sure that things will only get better,” Adodo said of what to expect tonight.

The brand has a Star Beer Village at the Bar Beach which has been bustling since the Countdown’s official flag off.