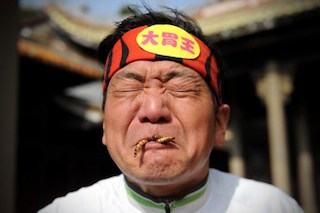 Pan Yizhong reacting as he eats worms during an eating race in Liuyang in China’s central province of Hunan. Pan Yizhong ate 147 dumplings in one sitting, and polished off 40 bowls of noodles in 15 minutes — and now China’s most renowned competitive eater is now searching for his most ambitious challenge yet, even though he says his hobby has cost him his marriage. AFP