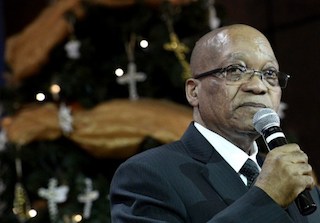 South Africans must build on Nelson Mandela’s legacy of racial unity and reconciliation in memory of the anti-apartheid hero, President Jacob Zuma said Tuesday in a New Year message.

“We are still coming to terms with our loss of this remarkable human being and world icon, and one of the greatest leaders to be produced by our country and the African continent,” said Zuma.

“It is not going to be easy to have another Nelson Mandela in our lifetime. However, he lives on in our hearts.”

“The values he stood for must guide our work as we continue to build on his legacy. In his memory, we must continue to reconcile and to unite our rainbow nation and to deepen non-racialism,” said Zuma.

“More importantly, unity must be the rock upon which our nation is built, to borrow from Madiba’s own words,” he added, referring to Mandela’s clan name.

With months to go before elections, Zuma made a call for South Africans to register to vote, and outlined jobs and education as priorities.

“Our country is today a much better place than it was before 1994. Life has changed for the better for millions of South Africans, but some of our people are still waiting,” he said.

“Therefore, our work is not yet completed.”

But the party has faced increasing unhappiness — including at Zuma himself — amid scandals, corruption and widespread unemployment.