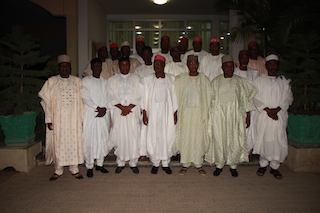 Kwankwaso, 4th right, with his visitors

The absence of immediate past governor of Kano state, Malam Ibrahim Shekarau in Kano Government House on Friday when the stakeholders of the defunct All Nigerian Peoples Party, ANPP, paid Governor Rabi’u Musa Kwankwaso a solidarity visit may be an indication that the proposed reconciliation between Shekarau and Kwankwaso may have hit the rocks.

Yesterday, stakeholders of the Peoples Democratic Party, PDP, led by Ambassador Aminu Wali and Mohammed Abacha, son of the late maximum ruler, Sani Abacha, paid similar visit to Shekarau in his Kano residence on Thursday wooing him to join the party.

Malam Shekarau who has consistently protested the arrangement by the national leadership of the All Progressives Congress that gives more prominence to newcomer Governor Kwankwaso, has openly registered his anger over what he described as systematic marginalization of himself and political associates since the merger arrangement commenced.

P.M.NEWS also learnt that the former Kano governor whose political rivalry with Kwankwaso started in 2001 is not comfortable with the dominant influence of the Kwankwassiyya Movement in Kano APC, a situation which he believes will make him redundant in the running of party affairs in the state.

According to one of Shekarau’s political associates, the Shekarau camp is worried that, “after spending time and resources to establish the foundation of APC, Malam Shekarau all of a sudden has been reduced to nothing by enemies of democracy. We will not accept it because it is against the tenets of democracy and justice.

“Right now, what we hear in Kano is the Kwankwasiyya APC. We know Kwankwaso and his political antecedents. If something is not done fast, he will hijack the APC structure in Kano and this will not augur well for the party. We are the old APC; our interest must be protected—somebody can not emerge from somewhere and dictate what happens in a party that we have labored to build.”

P.M.NEWS observed that many of Shekarau’s associates were at the meeting excluding ANPP’s governorship candidate in 2011, Abdullahi Salihu Sagir Takai who Kwankwaso defeated at the governorship polls.

Responding to his visitors, Governor Kwankwaso expressed happiness that at last, they have decided to come closer and give their own contribution to the development of Kano and the party, APC, pointing out that his desire was to ensure that Kano and indeed, the country at large get good and responsible leadership.

Governor Kwankwaso further noted that he left the PDP to join the party of the progressives because undemocratic elements in the PDP had broken the umbrella and left men of good conscience with the progressive spirit under the rain.

According to Kwankwaso, since the umbrella had been destroyed and shattered, people like him who has the interest of Nigeria and Nigerians at heart sought for a better platform to give responsible leadership to the people.

He urged his visitors to leave above board just as he advised them to remove personal interest ant put the interest of the party foremost as he assured that come 2015, victory would be sure for the APC both in Kano and the government at the centre.

Pundits however, believe that with the visit of those known to be Shekarau’s close political associates to Kwankwaso, all may not be well in the camp of Shekarau who many believe may settle for the PDP soonest.

But according to Malam Sule Ya’u Sule, the image maker of Malam Shekarau, the former ANPP Presidential candidate has decided to remain mute until the reconciliation committee set up by the national leadership of the APC completes its assignment.