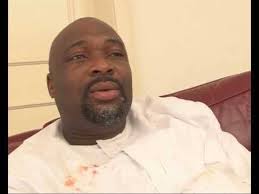 The Rivers State Government has reacted to the allegations made by the Police concerning the arrest of Chidi Lloyd, Leader of House of Assembly over the suspected murder of Police Sgt. Urang Obediah and Mr. Kingsley Ejeuo,said to be his kinsman and ‘political opponent’.

Mr. David Iyorfor, press secretary to Governor Rotimi Amaechi, said the Rivers State police command had released a completely distorted and untrue account of the circumstances surrounding the arrest of the Leader of the Rivers State House of Assembly, Chidi Lloyd on 2 January 2014.

Iyofor said Governor Rotimi Amaechi, no longer has a private jet, contrary to the statement by the Rivers Police Command that Lloyd wanted to escape in the Governor’s private jet.

Iyofor also added that Lloyd was nowhere near the plane that took the governor from Port Harcourt to Abuja.

“Governor Amaechi was about to leave for Abuja when he was informed that the Rivers State Police Commissioner Mbu Joseph Mbu had ordered that the plane(which is not the governor’s private jet, as claimed by the police) cannot leave Port Harcourt because Hon. Lloyd was in the plane and about to ‘escape’ with Governor Amaechi”.

The Governor was shocked, Iyofor said.

According to Nyofor, Governor Amaechi made several calls to CP Mbu Joseph Mbu, but none was answered.

But CP Mbu later showed up and when the governor asked him about the order to stop him from travelling, he denied giving such an order.

“Governor Amaechi put it to him that he(Mbu) came to search the plane for Chidi Llyod and told him to go ahead and search the plane. Mbu continued talking endlessly, showing absolutely no respect or regard for the office of the Governor of Rivers State who is the Chief Security Officer of the State.

“Governor Amaechi then called the Inspector-General(IG) of Police; While the governor was speaking with the IG on phone, CP Mbu was shouting at the governor, on top of his voice, trying to disrupt the conversation between the Governor and the IG to the shock and disbelief of those that were there.”

The statement went further to explain that when Governor Amaechi arrived Abuja later in the evening of yesterday, he was informed that Chidi Lloyd was arrested in his house in the presence of his family and lawyer,Emenike Ebete at about 3.30pm.

Ebete also confirmed that Lloyd was arrested in his house and at no time was the lawmaker attempting to escape with the Governor.

Ebete explained that it was not the lawmaker who was driving the car that killed the Sgt.Urang Obediah and Kingsley Ejeuo,but that Lloyd was very sick and was sitting at the back seat of the car when the accident happened on the East-West road near Emohua Local Government Secretariat, Emohua.

The Lawyer said what happened was a mere accident but the Police have added a political coloration to the whole incident and lies to discredict Llyod.

However,Jerry Needam,the Special Adviser to the Chairman of the Peoples Democratic Party, PDP, insisted that the late Ejeuo was a member of PDP and a political opponent of Lloyd who has resisted defecting to All Progressives Congress,APC.

The Police had in a statement by the Rivers Police Command last night said Lloyd was arrested while attempting to escape through the Airforce Base in Port Harcourt, the state capital.

According to the Police statement, said “Hon. Chidi Lloyd on 30/12/2013 while pursing his political opponent he knocked down Sgt. Urang Obediah, in spite of his effort to stop him, rammed and killed him and went ahead to crush the Passat car of Mr. Kingsley Ejeuo was driving and killed him”.

The Police further said “Initially the Police thought that it was a mere accident which ought to have been a manslaughter. The Commissioner of Police directed ACP. Aliyu Garba, the Area Commander Metro to visit him in his hospital bed and commiserate with him, conscious of what he did, Chidi Lloyd relocated to another hospital.

“ When facts emerged that Chidi Lloyd drove a bullet proof vehicle while pursuing his political opponent, late Mr. Kingsley Ejeuo whom he knocked down. He hailed from the same place with the lawmaker from Emohua and is believed to belong to the PDP camp led by Elder Felix Obuah,”, said Ahmad Muhammad, the police spokesman.

Police said Lloyd sneaked through the hospital’s back door while being guarded by four policemen on his hospital bed and escaped only to be arrested on his way to the Airforce Base in the convoy of three tinted bullet proof jeeps in his bid to flee from the long arms of the law.

Lloyd, who is facing a six-count charge of conspiracy and attempted murder before a Rivers State High Court sitting in Port Harcourt, was granted bail, in August last year in the sum of N40 million.

The presiding judge, Justice Latan Nyordee, in his ruling, admitted Lloyd to bail in the sum of N10million and three sureties in like sum.