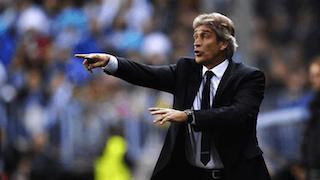 Manchester City manager Manuel Pellegrini has waded into the debate about diving in football by claiming that “players are always trying to cheat”.

FIFA president Sepp Blatter broached the issue earlier this week when he called for tougher sanctions to punish simulation, but Pellegrini fears that it may be a losing battle.

“I think it is very difficult to be a referee,” said the Chilean, in comments reported by several British newspapers on Saturday.

“The players play too quickly. The players are always trying to cheat because football is cheating.

“I think it is very difficult and I respect them (referees). Of course nobody likes it when the referee whistles against your team when it is wrong, but a lot of time he whistles and gives you an advantage that maybe you didn’t have.”

Chelsea midfielder Oscar was widely criticised after being booked for diving in an unsuccessful attempt to win a penalty during his side’s 3-0 win at Southampton on New Year’s Day.

Chelsea manager Jose Mourinho supported the decision, describing the fight to rid the game of diving as “an important issue”, but he also claimed that there were no habitual divers at his club.

“There are some divers in England. Not many, some. In Chelsea, no divers, no divers at all.

“Oscar made a mistake, which he tells me and I believe him. He was completely convinced the goalkeeper was coming to smash him. The goalkeeper didn’t, he made his mistake, he was punished with a yellow card, he accepts the yellow card in a very calm way.

“His manager comes after in the press to say, ‘Well done (referee) Mr Atkinson.’ End of story. Here we don’t have divers.”