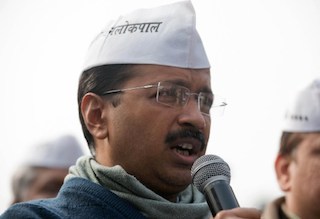 India’s new anti-graft party announced Saturday it would contest most of the seats in upcoming general elections after its stunning poll showing in the nation’s capital earlier this month.

One of the Aam Aadmi (“common man”) Party’s top leaders, Prashant Bhusha, announced the decision after the first day of a two-day meeting of the party’s top decision-making body in New Delhi to plan strategy for the elections, due in May.

The Aam Admi Party (AAP), formed just a year ago, “will fight the general elections, contest in the maximum number of states and in as many seats as possible,” Bhushan told reporters in televised remarks in New Delhi.

He said the party was looking for “honest candidates”.

The party won 28 seats in the 70-seat Delhi state assembly in polls in early December, routing the Congress party, which rules at the national level.

The AAP’s success has engendered hope among corruption-weary Indians that it could signal the beginning the clean-up of the nation’s graft-ridden politics.

Congress’s rout in Delhi and three other state polls has been seen as one more sign the powerful Nehru-Gandhi dynasty, which has given India three premiers since independence, may lose office in the looming general elections.

The rookie party’s performance in Delhi is being closely watched to see what it could deliver for the rest of India.

Party head Arvind Kejriwal, the new chief minister of the capital who has already slashed electricity costs and announced supplies of free water, has vowed to end the privileged culture surrounding Delhi’s politicians and make his administration down-to-earth.

Kejriwal and his ministers have refused to occupy the sprawling bungalows built by India’s former colonial rulers, opting for simpler dwellings or to stay in their own homes.

Their cars, meanwhile, are minus the red beacons and sirens that allowed their predecessors to zip through traffic.

The Aam Admi’s symbol is a broom — to sweep away India’s endemic corruption and bribery.

The Aam Admi party said on its website that it would announce who would contest the elections within two weeks.

Earlier this month, India’s parliament, heeding the anti-corruption voter mood, approved the appointment of a powerful anti-graft ombudsman to investigate wrongdoing in government.

Some 30 percent of Indian lawmakers in federal and state assemblies had criminal charges against them last year, according to local media.

But following a Supreme Court order last July, many faced being expelled from their seats.