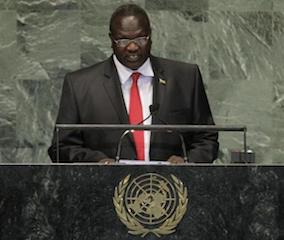 Reik Machar: leader of the rebels

Warring parties in South Sudan delayed direct peace talks on Saturday in Addis Ababa, Ethiopia, dashing hopes of a swift ceasefire to end raging fighting and the risk of a slide into all-out civil war.

While top leaders of the government and rebel teams have briefly met directly, the rivals continued Saturday to hold separate talks with negotiators.

No timeline has been set for the crucial face-to-face talks to begin, despite the teams having already spent three days in the same luxury hotel in neighbouring Ethiopia’s capital Addis Ababa.

Thousands of people are feared to have been killed in the fighting since it erupted on December 15, pitting army units loyal to President Salva Kiir against a loose alliance of ethnic militia forces and mutinous army commanders nominally headed by his rival, former vice president Riek Machar.

In South Sudan Saturday the army battled to wrest back control of the oil town of Bor from rebels.

“Our forces are still moving towards Bor, there were heavy battles on Friday,” army spokesman Philip Aguer told AFP, dismissing rebel claims they had been marching on the capital Juba.

There were reports of intense battles involving tanks and artillery on the outskirts of Bor, a dusty strategic town that has already exchanged hands three times since fighting began almost three weeks ago.

The ongoing fighting prompted the top UN aid official in South Sudan, Toby Lanzer, to warn that soldiers and rebels must protect civilians and aid workers, or risk worsening a situation he described as critical.

“More people arrived at our bases in Juba… we’re up to 30,000 in the capital alone,” Lanzer said late Friday.

The US embassy in South Sudan ordered a further pullout of staff on Friday because of the “deteriorating security situation”, although Washington — a key backer of the fledgling state — insisted it remains committed to ending the violence.

In Addis Ababa, there appeared little sign of swift progress.

South Sudan Information Minister Michael Makuei, part of the delegation to the talks, as well as rebel team spokesman Yohanis Musa Pouk, said the two sides would not meet until an agenda had been drafted by negotiators and agreed by both sides.

Makuei told AFP the two leaders of the delegations had met briefly, but that the teams were now “waiting to hear the way forward” from the negotiators, who are from the regional East African IGAD bloc of nations.

“The heads of the two delegations need to agree on an agenda… maybe tomorrow or after tomorrow,” rebel spokesman Pouk said.