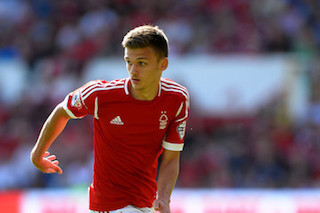 Nottingham Forest, a Championship club in the United Kingdom created another upset in the English FA cup, today by humiliating premiership club, West Ham United by 5-0.

The first goal came via a penalty at the 13th minute. It was scored by Djamel Abdoun.

Jamie Paterson was the star man for Championship side Forest with a 14-minute hat-trick against a second-string West Ham team featuring three young debutants.

West Ham manager Sam Allardyce made nine changes to his starting XI, but he defended his team selection afterwards, telling ITV: “What choice did I have? I don’t think I had one.

“I make the decisions for the benefit of everyone at the football club. We have a huge amount of problems in terms of available players.

“We have a League Cup semi-final against Manchester City (on Wednesday) and the main priority is to get to Wembley. My changes had to be severe today. I didn’t want it to be.”

Paterson, who joined Forest from Walsall last year, had never previously scored for the club.

“I certainly won’t forget that game,” he said.

“It’s a good result for us. We’ve been doing well in the league and we took it into a cup game.”

Forest took a 12th-minute lead with an audacious dinked penalty from Algerian midfielder Djamel Abdoun, after Paterson drew a foul from George Moncur with a sharp Cruyff turn.

In response, Ravel Morrison saw a free-kick palmed over the crossbar by Karl Darlow, but Forest finished the first half strongly.

West Ham goalkeeper Adrian had to save with his feet from Eric Lichaj and Henri Lansbury blazed the rebound over the bar.

Paterson added a second in the 65th minute, drilling home a low shot, and he made it 3-0 six minutes later by stabbing home from Lansbury’s square pass.

The 22-year-old forward completed his triple in fine style in the 79th minute, drifting past three visiting defenders on the edge of the penalty area before lashing a low shot into the bottom-left corner.

Andy Reid slammed home in injury time to complete a miserable afternoon for Allardyce’s side, who are currently second from bottom in the Premier League table.