Returnees from Central Africa appeal to FG for jobs 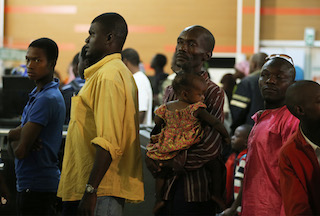 A cross section of Nigerians fleeing from CAR on arrival in Abuja. Now they want jobs. Photo Femi Ipaye

Some Nigerians evacuated from Central Africa Republic (CAR) have appealed for jobs from the Federal Government.

The returnees told the News Agency of Nigeria (NAN) in Abuja on Sunday that gainful employment would help to cushion their plights.

One of them, Uche Okechukwu, who hailed Imo, said: “I am pleading to the Federal Government to help us with something to do to survive because we have lost everything.

Another evacuee, Mrs Charity Igwe, from Anambra, who flee CAR with four children, said going home with the children would not be easy for her.

Igwe said her husband refused to come so she had to leave with her children for safety.

Mr Sule Idris from Kano State said he was coming home after a four-year stay in CAR, stressing that his regrets was that he lost everything.

Idris appealed to the Federal Government to provide him with a job to make life meaningful for him again.

The Defence Headquarters (DHQ) in collaboration with NEMA, Nigeria Immigration Services and other government agencies, have so far airlifted 1,596 Nigerians from CAR back to the country.

A NAN correspondent, who monitored the airlift in Bangui, reports that the airlifting followed the presidential directive that all Nigerian citizens be evacuated.

The Head Mission, Control Centre of NEMA, Cdr .Mike Igwe, said the agency had been on ground for over a week to provide succour to the displaced persons.

Igwe said that there had not been any casualty, so far in the exercise.