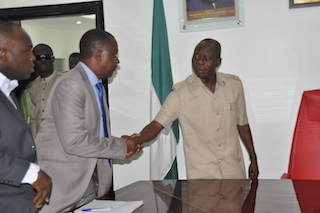 No more handshake: Oshiomhole with Dr. Eghe Abe of the NMA(file photo)

The Nigeria Medical Association (NMA) in Edo state has issued a 21- day ultimatum to Governor Adams Oshiomhole to address the infrastructure decay, environment and poor condition of service in its Hospital Management Board.

The NMA Chairman, Dr Emmanuel Ighodaro, announced the ultimatum at a press conference in Benin on Tuesday.

Ighodaro said that doctors in the state would be called out for an industrial action if the government failed to heed the call.

The strike notice by the doctors came barely 48 hours after the national leadership of the NMA suspended its planned nationwide strike.


He said many factors were militating against qualitative health care delivery in the state, noting that the situation was frustrating the efforts of doctors in providing quality services to citizens.

Ighodaro, who decried the poor conditions of health facilities, said that only 150 doctors were attending to patients in overcrowded public hospitals in the state, which lacked basic facilities.

“We have made several presentations and representations to the state government at different fora on the decay of health infrastructure, work environment and poor condition of service.

“But the government has not shown any convincing commitment in addressing the myriad of problems confronting the health sector in the state,” he said.

Ighodaro accused the government of displaying “high level insensitivity to the health burden and sufferings of Edo people due to the poor state of health facilities in the state”.

He particularly said that medical services at the Central Hospital and Stella Obasanjo Women and Children Hospital, both in Benin, and other major state-owned public health facilities had depreciated.

He also deplored what he described as “multiple taxation’’ of private health facilities in the state.