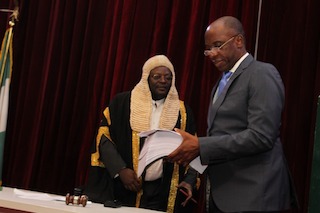 Governor Chibuike Rotimi Amaechi, Governor of Rivers State took political pundits by surprise today when he presented the 2014 budget to the members of the Rivers House of Assembly at the Executive Chambers of the old Government House, an annex to the new Government House Complex.

The budget of 485.524 Billion was consequently passed by the House at a plenary, with the Speaker Otelemaba Dan Amachree, presiding.

Ministry of Works has the highest allocation of 60 Billion naira, Education 30Billion, and Transport subsector was allocated 10 Billion

Amaechi said the focus of the budget will be on completing ongoing projects in Health, Education, Roads, Transport, power, Water and Agriculture and other critical infrastructure.

The Governor said the budget will be funded by N241.243billion federal allocation, N92 billion Internally Generated Revenue; Prior year balance of N10.717billion; loans N100billion; credit from World Bank- N6.983billion, EU grant of N0.660 billion and sale of assets of N33.5billion.

Twenty three members of the Assembly were present at the budget presentation today out of the 32 members. One of the members, Tonye Harry died last year, while Chidi Lloyd, the Leader of the House is in Police custody after a traffic accident.

Immediately after the presentation, the House went into plenary.

After the first and second reading, it was passed into law as 2014 Appropriation Act.

The six anti-Amaechi lawmakers were absent at the budget presentation.

On why the Lawmakers decided to sit at the old Executive Chambers, Leyii Kwanee, the Deputy Speaker, also a Lawyer, told P.M.NEWS that the members had no other option since the Joseph Mbu led police refused to make the assembly accessible to them.

The members last month had signed a police document binding all of them to be of good behaviour. But the police have refused to throw the complex open.

“Nobody can continue to hold the state hostage. We cannot abandon the mandate freely given to us as elected leaders to those who don’t mean well for the state”.

Some persons were arrested by the Joint Taskforce carrying dangerous weapons for a mission still unclear.

A Port Harcourt based lawyer, Chris Nwadigbo, described the budget presentation as a wrong step.

On his part, Ken Atsuete,a Human rights lawyer, said that in the face of the refusal of the Police to allow the Lawmakers access into their legislative chambers despite signing documents to be of good behavior and threats to lives and property in the state, the lawmakers, must sit within the confines of Government House property to do their legislative duties to the state not to Governor Amaechi.

“I learnt they sat to pass the budget in the old Assmbly Complex annex to Government House after forming a quorum as required by law and the house rules. I don’t see anything wrong with that. The state must not be held hostage by few,” Atsuete said.

However, Evans Bipi and the rest six who had earlier raised alarm that the state budget would be passed today, dismissed the passage of the budget as illegal and unacceptable.