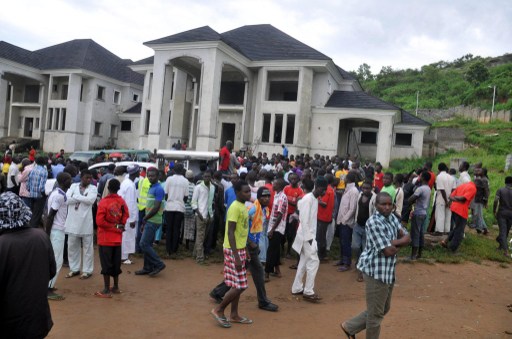 The uncompleted building where the killings occurred

The State Security Services, SSS, on Wednesday kicked against the demand by the National Tricycle Owners and Motorcycle Riders Association, NATOMORAS, for a Five Hundred Million Naira compensation to families of 8 suspected Boko Haram members killed by security operatives last September in an uncompleted building in Abuja.

An official of the SSS, Clifford Osagie, at a presentation made before the Prof Chidi Odinkalu led 3-man panel of the National Human Rights Commission probing the killing, that before such demands can be canvassed, that the commission has an uphill task of ascertaining the innocence of the slain persons.

Global Rights group and the National Commercial Tricycle and Motorcycle Owners and Riders Association of Nigeria, NATOMORAS, had complained to the NHRC over the killings, insisting that the 8 persons killed by security operatives were members of NATOMORAS.

“We need to ascertain whether or not the eight persons killed were innocent; until we reach that conclusion, one cannot make such a demand. It is very difficult for anybody to conclude that those killed were innocent until investigation is completed” Mr. Osagie posited.

According to him, “there is need to determine whether or not there is a nexus or link between those killed and leader of the Boko Haram group, one Suleiman Musa aka R Kelly, suspected to be residing in the uncompleted building as well as the culpability of those killed in the attack”.

Furthermore, the SSS official maintained that considering the manner and circumstances surrounding the killings, that it was difficult for the Human Rights Commission to ascertain their innocence of the slain suspected terrorists.

“We came under fire and we responded in self defence. Before talking about compensation, it is left for the commission to find out whether those killed were innocent unless the National Human Rights Commission has a premeditated notion that those killed were not culpable, Osagie argued further.

He also wants thee Commission to determine who was responsible for the killing, whether it was the bullets of the security operatives or that of those who had opened fire on the security forces, stressing that it is not easy to differentiate the bullets that killed the 8 persons.

“It will be hasty to conclude at this point without ascertaining whether or not those killed were suspected members of the Boko Haram sect. If eventually proven that they were Boko Haram members, would they be entitled to compensation” Osagie queried.

He however admitted that there is provision for compensation in the country’s statute books but insisted that the Supreme Court has laid a foundation that in a situation that threatens the country, “national security takes precedence over individual right.

On the issue of whether there was surveillance before the operation, Osagie said, “We had a timeline, our duty is first to prevent before investigation. If we did not react swiftly, it would have been a grave calamity in Abuja. We acted professionally to avert a planned attack.

The Nigeria Army had last December told the probe panel that it carried out the operation at Apo District of Federal Capital Territory in which the persons were killed to avert a planned attack in Abuja by suspected members of the Boko Haram sect.