The Chosen Church and the Lazarus Miracle that didn't happen 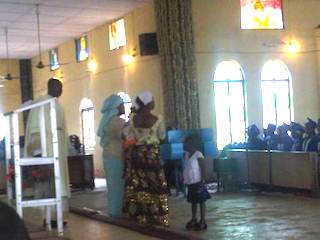 The family of the deceased coming out to offer apology

P.M. NEWS shares here a pathetic story about a Lazarus like miracle, promised by prophets of The Chosen Church, but which did not happen in a community in Nigeria’s Imo state. It is a wake-up call to all gullible Nigerians who believe everything their pastors tell them, hook, line, and sinker.

The book of Matthew 24:24 says: “For false christs and false prophets will arise and will show great signs and wonders, so as to mislead, if possible, even the elect. 25“Behold, I have told you in advance”.


This Biblical injunction freely and clearly offers an advance warning that many Christians are yet to heed. It warns about the rise of false prophets masquerading as men of god that use God’s name to swindle, deceive and hypnotize the gullible. That was exactly what happened in Umuezii, Nguru Mbaise where the Chosen Church of God prophets embarked on a failed mission to resurrect the dead. This is not the first time the Chosen Church is directly fingered in fake miracles and spiritual hocus-pocus.

A young man, from Umuezii community died in Burkina Faso in November last year under mysterious circumstances. A month after, his sealed body was brought back to Nigeria and was buried the same day in his family compound in Umuezii, Nguru Mbaise, Imo State.

Trouble started when prophets and seers of the Chosen Church of God prophesied that the dead-and-buried young man was still alive (six feet beneath the earth) as his soul has persistently approached them via telephone calls and other spiritual means, requesting immediate exhumation. His elder sister, who is a member of the Chosen Church, communicated this prophecy to the entire family, leading to a family resolution insisting on the “divinely ordered” exhumation.

The decision to exhume the dead body did not go down well with the community as such act was considered an abomination both under the native tradition and under the prevailing Catholic norms deeply established within the community. All entreaties to the family made by the traditional ruler and parish priest of the St. Luke Catholic Church, Umuezii to refrain from such religious charade fell on deaf ears. It got to a point that the deceased family representatives openly accused the church and community leaders of killing their late brother, and preventing his “god-ordained” resurrection.

As a lasting solution to the impasse, the traditional ruler of the community invited the Chosen Church seers and prophets to sign an agreement of performance failing which they will be handed over to the police authorities for prosecution. The second condition was that the miracle will be performed in full public glare and in the presence of other independent witnesses. Proudly beating their chests and boasting deafeningly about their “majestic powers”, the seers and prophets signed the agreement and a date was mutually agreed for the resurrection miracle.

On the appointed day, a horde of prayer warriors, choristers, singers, speaking-in-tongue experts, seers, prophets and the like stormed the village as early as 6 a.m. The traditional ruler also invited the police, radio commentators, reporters and correspondents from local newspapers and the state-owned Imo Broadcasting Corporation. Chosen Church of God seers boastfully started with an early morning prophecy that the dead young man will “resurrect” by 12 noon prompt. The digging up of the grave followed immediately until the body was exhumed.

Then the singing, violent shaking, screaming, cursing, loud yelling and other theatrical displays in the name of deliverance prayers ensued while the large crowd of keen onlookers watched with deep interest. From 6.a.m till 12 noon, there was no sign that the young man was preparing to wake let alone resurrect. Seeing that the 12 noon deadline had passed, the seers quickly issued another prophecy shifting the hour of resurrection to 3.p.m. By this time, the prayer and singing sessions became even more intense and violent. 3 p.m came and went. No sign of life. The Chosen Church prophets again, quickly handed down another prophecy declaring 6.p.m as the divine resurrection hour. 6.p.m also went by, and the dead man remained still, lifeless and unresurrected till this day!

Understandably impatient and angry after the 6p.m deadline, the policemen on standby arrested all the prophets, dancers, singers, clappers and everybody that accompanied them to the community. But before then, the Chosen Church prophets had forwarded messages to their head office requesting for spiritual reinforcement. Undeterred by the arrest of their team members, an additional team that arrived around 6 p.m continued with the prayer sessions even more aggressively and vociferously. They prayed and sang all through the night till the following morning. Still, no sign of resurrection! The police officers, who had then totally run out of patience, arrested the remaining Chosen Church members, and everyone connected to the resurrection miracle including the deceased’s family representatives.

Some of the arrested Chosen Church members are currently on bail, while a lot more are still in custody till date. The dead body was deposited at the morgue at the Federal Medical Center, Owerri, as exhibit, pending further police investigations and prosecution of the false prophets.

I was present at the New Year church service held at St Lukes Catholic Church, Umuezii, Mbaise where the parish priest’s sermon harped on the infiltration of false prophets into the Christendom, warning parishioners to be wary of them. He then invited the members of the deceased family to tender an unreserved apology to the community for the abominable acts they committed. (PICTURED ABOVE) The deceased’s elder sister tendered what seemed like a half-hearted apology on the family’s behalf.

What happened in Imo State is reminiscent of the stories that feature on Nkan ‘Nbe, a popular Yoruba TV Program that features latter-day mystical occurrences. The Imo incident provides a compelling and cogent rationale for the effective regulation of the nefarious activities of churches whose stock in trade is to constitute public nuisance and to deceive and hypnotize the gullible. As a direct result of this incident, some Mbaise communities have proscribed the activities of Pentecostal churches in their localities.

All eyes are on the Imo State Police Command to see how they would handle this issue, and ensure that measures are put in place to deter future sinister activities perpetrated under the banner of religion. Perhaps, its time to ban the churches and their abracadabra miracles. That time is NOW!
Culled from the blog of Victoria Ohaeri @http://victoriaohaeri.wordpress.com/2014/01/07/the-chosen-church-and-an-abracadabra-resurrection-miracle/