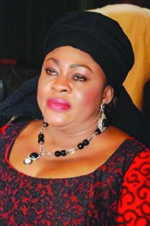 Nigerians have again called on President Goodluck Jonathan to sack embattled Aviation Minister, Stella Oduah, over the fresh certificate scandal she is embroiled in.

News website, Sahara Reporters, reported on Monday that Oduah’s claim that she obtained a Master’s degree in Business Administration from St. Paul’s College in Lawrenceville, Virginia in 1982, had been found to be false.

And The Punch newspaper reported on Thursday that authorities at the Saint Paul’s College, Virginia, United States, said they are unable to confirm if indeed Oduah, even bagged a first degree in Accounting from the institution.

Those who reacted to the fresh allegations involving Oduah said she should be sacked immediately or resign honourably.

Tukur said the bullet-proof car scandal and Oduah’s lies should be enough reason in any sane country to remove her.

To Comrade Yinka Abioye, Deputy General Secretary, Air Transport Services Senior Staff Association of Nigeria, ATSSSAN, Oduah must prove that she has the qualifications she claims to have.

“The onus is on her to prove that she actually obtained the certificates she claims to have obtained. If she fails to do that, then there’s something wrong somewhere. As for her sack, people have been calling for her sack since the bullet-proof car scandal but nothing seems to have happened,” Abioye said.

According to Comrade Debo Adeniran, Chairman, Coalition Against Corrupt Leaders, CACOL, the scandal is an indication that appointments are made into political offices based more on sentiments than competence or verifiable measure of integrity.

“Stella doesn’t require a Ph.D to be minister, only cognate experience that will prevent her from being bamboozled. Being capable of taking constructive decisions is enough.

“This is what a country that places more premium on paper qualifications than competence gets. Of course we’ve called for the resignation or sack and prosecution of Stella Oduah, first for incompetence and corruption, now we insist on  her sack for certificate forgery,” Adeniran said.

Others who preferred not be mentioned also called on the President to remove Oduah from office.

Nigerians had earlier called for Oduah’s sack in October last year after she admitted before the House of Representatives members that she had approved the purchase of two BMW bullet-proof cars at the hefty sum of N255 million.

The cars were not budgeted for and were above her ministerial approval limit. The lawmaker indicted the minister at a plenary and called on Jonathan to review her appointment. But the President is yet to act and the woman has said she is not going anywhere.