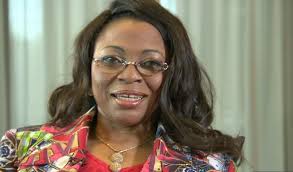 Jamiu Yisa
Africa’s richest woman, Folorunsho Alakija has disowned the posters advertising her interest in the Lagos Governorship election in 2015.

Alakija in a statement urged the people to ignore whatever they may have read purportedly portraying her as a governorship aspirant.

According to the statement,”It has come to my notice, that there are posters and fliers being circulated in Ikorodu and other parts of Lagos State announcing me as a Governorship aspirant.

“This is not true and I hereby confirm that I have no such intentions. Therefore, I disassociate myself from any persons or group of persons, posters or fliers in circulation about me contesting for governorship.

“I have been paying attention to my calling from God to look after widows and orphans through The Rose of Sharon Foundation and I am also in service most importantly to God’s work as a Minister of his Word through His Ministry committed to us as the Rose of Sharon Glorious Ministry International.

“God has not called me into politics and I have never been involved in politics. Please ignore whatever you may have read purportedly portraying me as a governorship aspirant.

Her posters were this morning seen at the Lagos State Government Secretariat, Alausa inviting people to support her ambition for the governorship seat.

The caption on the posters read: “2015: Vote Folorunsho Alakija for Governor.” The posters did not specify Alakija’s political will be contesting.

It could also not be ascertained if the posters emanated from her as efforts to get her to comment on issue proved abortive at press time.

Calls made to her phone was picked by a white man who said she was in a meeting and that she would call back after the meeting, but she never did.

Alakija is seen by many as a woman of impeccable character and one that could provide the needed leadership to move Lagos forward, but with the dominant All Progressives Congress, APC, in power in Lagos, it is doubtful if she can achieve her aspiration outside the party.

In 2013, Forbes named Alakija as the richest black woman on earth as she defeated the television show-host and actress, Oprah Winfrey. By November, 2013, Forbes put her net worth at $2.5 billion. But by January 2014 her net worth had skyrocketed to $7.3 billion courtesy Mail of UK, beating Oprah Winfrey whose net worth is now $2.9 billion to the second place.

She worked as a secretary in a Nigerian Merchant bank in the 1970s and later left to study fashion design in England. She subsequently founded Supreme Stitches, a Nigerian fashion label that catered for upscale clientele, including the late Maryam Babangida, wife of Nigeria’s former military Head of State, General Ibrahim Babangida.

It was during the reign of Babangida that her company Famfa Oil got an oil prospecting license which went on to become OML 127, one of Nigeria’s most prolific oil blocks. Famfa Oil owned a 60% stake in the block until 2000, when then President Olusegun Obasanjo acquired a 50% interest in the block. Famfa Oil went to court to challenge the acquisition, and the Nigerian Supreme Court reinstated the 50% stake to Famfa Oil in May 2012.

Her 60 per cent stake in the block is currently valued at around $7.3 billion, Ventures Africa reported.