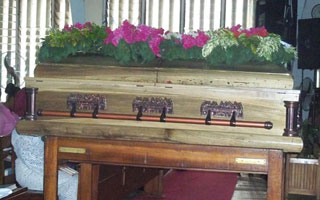 Virtually everyone that attended the funeral could not hold back tears throughout the funeral programme.

Earlier, a funeral service was held in her honour at Chapel of The Ressurection, University of Ibadan (UI) between.

In his sermon, Very Rev. Kunle Oyelade who commiserated with the family said that no one could answer the question of why  death took Iyetade away. But he urged everyone to give their lives to Christ.

He pointed out that it would be proper for people to say good things after one might have gone. Those who paid their tributes to the late deceased which include Ilemakin Soyinka, Olaokun Soyinka and Bolu Onabolu shared the good and the bad time spent together with the

She was described as a very religious, kind-hearted, nice and generous woman.

Two of the deceased sisters, Moremi and Peyibomi in tears read some of the poems the deceased wrote when alive.

Among the dignitaries in attendance were the former governor of Cross River State Donald Duke, Governor of Rivers State, Rotimi Ameachi, and Managing Director of Tanus Communications, Dr. Yemi Ogunbiyi