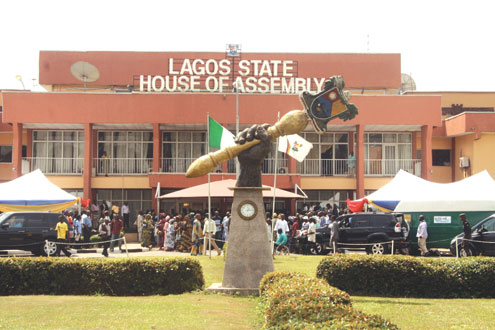 The Lagos State House of Assembly, western Nigeria has approved the sum of N489. 690 billion as budget for the 2014 fiscal year.

As passed very late on Thursday, the budget figure is 3.43 percent lower than that of last year which was N499. 105 billion.

The approved sum shows N234.665 billion as recurrent while the capital expenditure is N255.025 billion.

Before it was passed, the House had taken the report of its committee on Budget chaired by Mudashiru Obasa which had a breakdown of the budget on sectoral basis.

The report stated that the committee slightly adjusted the budget reducing allocations to some ministries, agencies and departments and adding the amount to some others, based on their needs.

The breakdown of the budget shows that the state would spend the sum of N51.378 billion on Education as Heath got N22.07 billion. Works and Infrastructure got N100.12 billion and Environment got N25.67 billion.

Also, Agriculture and Cooperative got N23.21billion, Transportation got N29.13billion, Information and Strategy got N28.73billion, Judiciary got N31.28billion, Commerce and Industry got N7.98billion and Women Affairs and Poverty Alleviation got N1.36billion.

Speaker Ikuforiji directed the Clerk of the House, Mr. Ganiyu Abiru, to send the approved budget to Governor Fashola without delay for his assent.