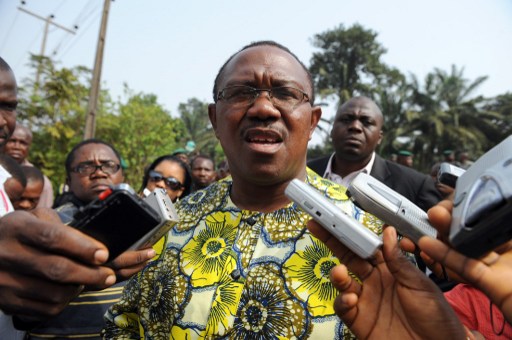 Governor Peter Obi: gets the 'Rock On' title

The All Progressives Congress (APC) in Anambra has described the conduct of Saturday’s local government elections in the state as a “grand charade and deceit”.

Reacting to the conduct of the election in Awka on Saturday, the Interim Publicity Secretary of the party in the state, Mr Chukwuma Agufugo, said there was no election in the state in the real sense of the word.

“Be it known to the people of Anambra and Nigerians that there was no election in Anambra State today.

“Any charade of names emerging from this fiction can never be accepted by our people as their genuine representatives,” Agufugo said.

The secretary noted that reports from the field justified the position of the party that APGA and the Anambra State Independent Electoral Commission (ANSIEC) had concluded plans to rig the election.

“Reports of events from all the wards and local governments in the state have shown that our people have decided not to join Gov. Peter Obi and Chief Victor Umeh in chasing mirages,’’ he said.

Agufugo said the party would take every legal means to ensure that the people of the state were not deceived.

In Aguata, the Electoral Officer for the council area signed an undertaking at Umuchu that Saturday’s statewide council election did not hold in the area.

The agreement was signed between the community and the electoral officer in the presence of security agents and the party agents rescheduling the election for another day.

This followed the demands by the community that the election be rescheduled for an acceptable day when the materials would be made available on time.

Mr Reuben Uzowulu, the Electoral Officer for the council, had told the News Agency of Nigeria (NAN) that there was a problem of non-arrival of the sensitive materials, particularly the result sheets, from Awka, the state capital.

Uzowulu said the result sheets were brought to Umuchu wards 1 & 2 at about 2:30 p.m. after efforts by the Anambra State Independent Electoral Commission in Awka.

He said the delay emanated from the commission’s headquarters in Awka.

Reacting, Mr Chukwuma Ezeafulukwe, a former deputy chairman of Aguata Local Government Area and the Treasurer of Umuchu Development Union, said the people of the area came out early but were disappointed.

He said the people discovered that the result sheets were not included in the materials sent to the wards and insisted that the materials be completed before the commencement of the exercise.

Ezeafulukwe said the agreement became imperative because of the inability of the ANSIEC to provide the result sheets.

“This is no democratic process, there is no transparency; we need to put a stop to this madness,’’ he said.

Mr Godwin Ezeemo, the leader of the Progressives Peoples’ Alliance (PPA) in the state, said that ANSIEC did not do a good job having planned the election for almost eight years.

Ezeemo said the logistics problems which bothered mostly on sensitive materials, could have been sorted out to make for a smooth exercise.

He alleged that there was no election in the local government going by the reports of the party members.

“it is really painful that people have called for local government election for the past 16 years and today what we are having is a make-belief. It is heart-breaking,’’ he said.

Voter apathy was reported from Onitsha, the commercial capital.

A correspondent of the News Agency of Nigeria (NAN) who monitored the election in the commercial city observed that though voting materials arrived on time at most polling stations, (about 7.30 a.m.) the voter turnout was poor.

Majority of the residents of the city attended to their personal business as most shops in the burstling city opened for transactions.

Major markets in the city were, however, under lock and key but smallers one opened for business.

Reacting to apathy shown by the voters, Mr Mike Obiadada, who resides on Okosi Street, blamed it on the timing of the election.

“Our people have just returned from the yuletide holidays and are not sensitised enough for the election,” he said.

Mr Chidi Onyema, another resident, attributed the apathy to doubts about the council election holding after many postponements.

The News Agency of Nigeria (NAN) reports that the materials were still being loaded into vehicles at about noon in some council headquarters for onward distribution to polling units.

“We are trying to make sure that there are enough police personnel to escort election materials to the various polling units before we dispatch them.

“We don’t want a situation where the materials will be snatched by hoodlums on the way,” she said.

A coucillorship candidate of the All Progressives Grand Alliance (APGA) for Nimo Ward 4, Mr Jude Atupulazi, expressed confidence in the poll in spite of the hitches in the distribution of the materials.

Atupulazi said the delay was a common phenomenon, explaining that everywhere was calm and that the people were enthusiastic about the process.

“The lateness of commencement does not have anything to do with the credibility of the poll,” he argued.

At the Awka South Local Government Area where the story is the same, the councillorship candidate of the Labour Party for Isiagu-Eziagi Ward, Mr Nweke Chukwuebuka, expressed worry about the development.

“We have been here since 7 a.m. waiting for materials to be loaded and sent to our polling unit and this is 10:11 a.m.

“As we speak, we hear that results sheets and the supervising presiding officer are nowhere to be found.

“They are finding a way to rig the election and we will not accept the ploy,” he alleged.

Reacting, however, the Electoral Officer in-charge of Awka South, Mr Augustine Nkado, said the delay came from the police.

“We wanted to start distribution early but the police said that the divisional police officer must be around before we commence,” Nkado said.