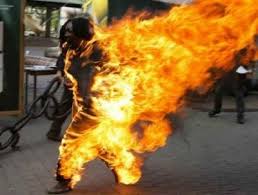 Illustration- an example in self immolation

A 21-year-old man, Mansur Tanko, a muslim, on Friday, burnt himself to death in Jalingo, capital of the northern Nigerian state of Taraba, after a disagreement with his father, Tanko Mijinyawa, over marriage.

Tanko, according to an eyewitness, Alhaji Jibrin Bala, set himself ablaze because his family refused to approve his wedding with a girl, Blessing, a Christian.

The eyewitness told sympathisers that Tanko introduced Blessing to his father as his proposed wife, but the father kicked against the union, describing it as a bad choice.

Bala said efforts by the father to convince his son to look for another girl failed, as he insisted that he could not survive without Blessing.

The eyewitness added that Tanko suddenly left his father and went to a corner in the compound, where he poured petrol on his body and set himself ablaze.

“When we suddenly saw fire, everybody ran toward the corner of the compound, only to see Tanko burning.

“The father and other people in the compound tried to rescue Tanko from the fire, but failed as the flame was much and we could not move near,” he said

Tanko’s father is currently receiving treatment at the Federal Medical Centre, Jalingo, for injuries sustained while trying to rescue the son from the fire.

The Taraba Police Public Relations Officer, Mr Joseph Kwaji, confirmed the incident and said the Jalingo Division of the police has commenced investigation into the matter.