Senator Abe in a state of shock, says doctor 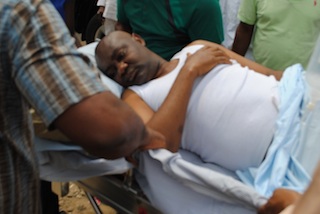 Senator Magnus Abe being stretchered into an ambulance on Sunday

The tense political crisis Rivers State boiled over today as Senator Magnus Abe was shot twice in the chest and leg with a rubber bullet by some men of the River State Police command, which knocked him off his feet and has rendered him speechless and in severe shock, his doctor said.

According to witnesses, Abe, who is the Chairman of the Senate Committee on Petroleum (Down Stream) was attacked at the Rivers State College of Arts and Science, venue of the rally organised by Save Rivers Movement, SRM, a group loyal believed be loyal to the Rivers State Governor, Hon. Rotimi Amaechi.

While the Rivers State police command claimed that the group did not apply for permit to hold the rally and that its men acted within its purview to disperse the group members, P.M.NEWS is in possession of a letter submitted to the Command by the group.

Magnus Abe, the former Secretary to the State Government, was said to have gone to the. College of Arts and Science off, Rumuola road,Port Harcourt, see to final arrangements for the rally which was another in a series of others billed for the 23 local Government areas of the state.

The Men of the Rivers Police Command had arrived the venue as early as 7 a.m and taken strategic positions around the rally venue and blocked the ever busy dualized Rumuola road refusing access to the venue.

The Senator was said to have been hit twice in the chest and leg by some rubber bullets fired by some trigger-happy police men, who confronted the lawmaker as he was about to enter the venue of the rally.

The Chief of Staff to the Rivers State Governor, Tony Okocha was said to have been lucky to escape by the whiskers.One report said he was shot in the leg.

The Senator was rushed immediately to a private hospital, Krisany Medical Services, located at the Agudama area of Port Harcourt, where he was attended to by a team of medical personnel, headed by Dr. Mackay Anyanwu.

Dr. Anyanwu, who spoke on the Senator’s state, explained that the Senator was suffering from severe blood shock.

Dr. Mackay explains; ‘’The patient( Abe) was brought in a state of a shock, as evidenced by low blood pressure. He was restless and he couldn’t communicate or reason coherently.’’

‘’ As a first aid, we treated him for traumatic shock, because the implication of his state was that there was severe blood trauma and the amount of layers affected could not be detected immediately. This can only be done through the hemorrhoid tests.’’

Dr Anyanwu continues; ‘’We have administered Oxygen treatment on him for resuscitation and primary medication, but we also detected severe internal bleeding and high level haemorrhaging in him. Another bad news is that we also detected that the affected side is showing severe swelling, which led me to the conclusion that he must have been hit by a high caliber weapon and my fears were confirmed when I was told that he was shot with a rubber bullet.’

Before the shooting of the loyalists of the Governor,the Police had dismantled the canopies mounted at the venue with the excuse that the organizers never applied and got permit from the Police.

’The Rivers State Police Public Relations Officer, PPRO, Ahmad Muhammad, blamed the incident on the political group for not applying for permit to hold the Sunday rally.

He added that the crowd had to be dispersed for this reason.

‘’They have not applied for Police Permit to hold a rally, so the police had to disperse them. They were telling lies about the application, they said they made’’ he said.

He denied that police shot the senator.”We didn’t fire a single shot at anybody”.

The Chairman of the Save Rivers Movement, Aholu Okechukwu, made available to journalists copies of the Application for permit to hold the rally written to the State Police on January 7, 2014.

The letter received by an officer on behalf of the state Police Command on same day, was signed by one, Charles Aholu and titled’’ Request for Police Safety’’.

“In a swift reaction to the incident, the Supreme Council of Ogoni Traditional Rulers, through its Chairman, His Royal Highness, Mene Swanu Baridan, condemned the police attack on one of its illustrious sons and warned the leadership of the country on the life and safety of the Senator.

“We condemn in its entirety, the attack on Senator Abe. It is unnecessary and uncalled for. We hereby warn the President over the safety of our son, the Senator’’.

The rigger-happy policemen, had cordoned off the entire areas bordering the Rumuola venue of the rally and even moved three kilometers away to the centre of the city.

Our correspondent and other Journalists were stopped by Policemen marching towards other areas of the city. The heavily-armed policemen, who were chanting war songs as if there was war, fired canisters of tear gas into the midst of passers-by, mostly residents coming from churches and places of worship. The shooting caused a stampede with many suffering various degrees of injuries.

Unconfirmed reports said two children who were sleeping in the neighbourhood and who may have inhaled teagas shot into their rooms may have been suffocated to death. The APC in an earlier statement claimed that five children were killed by the police.

Ike Chinwo,former member representing the Obio Akpor federal constituency, where Nyesom Wike,the supervising Minister of Education hails from was arrested by the Police.

In a swift reaction,the state chapter of All Progressive Congress,APC,said it was shocked and shattered by the news of the unwarranted shooting this morning, of Senator Magnus Abe, the Senator representing Rivers South East zone and Chairman of the Senate Committee on Petroleum (Downstream), and Chief Tony Okocha, the Chief of Staff to Governor Chibuike Rotimi Amaechi and the killing of five children of Rivers State extraction by men of the Nigeria Police.

In a statement by the Interim State Chairman, Dr. Davies Ibiamu Ikanya, the party condemned what he called “premeditated murder of our five children and attempted murder of two prominent and innocent Rivers citizens by the State Police Command, which seems happy to transform into an army of occupation instead of discharging its constitutional role of safeguarding lives and property. This is a declaration of war on Rivers State and its people”.

APC said it holds the State Police Commissioner, CP Joseph Mbu, responsible for the deaths of five innocent kids that maybe our future political leaders by these agents of darkness and the attempted murder on Senator Abe and Chief Okocha since the shooting was carried out by a team of regular police and Mobile policemen from MOPOL 19 on the orders of CP Mbu.