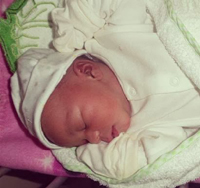 Popular Nigerian dancer and choreographer Kafayat Ameh, a.k.a Kaffy, has been delivered of a baby girl.

The new baby is her second child for Ameh and was born on Saturday in a Lagos hospital. Both mother and child are said to be doing well.

Her first child, a boy, was named Sean.

The talented dancer married her heartthrob, Joseph Adakole Ameh in 2012 at an elaborate ceremony in Lagos. Ameh is P-Square’s live band drummer.

Recently, the social media was abuzz with the story of Kaffy being eight years older than her husband. Joseph is 25.

One of Kaffy’s aides who responded to the controversy described it as unnecessary and a distraction, saying that the couple loved each other.

According to the aide: “Kaffy and Jo love each other so much, that is all that matters, not age.”

Kaffy once disclosed how her mother nearly made her go into prostitution so as to make ends meet.

She revealed this while addressing a group of youths at a programme.

She said she was revealing this to encourage young ones to learn how to read between the lines so that they won’t be misled because sometime, the people that they look up to may be the ones that will lead them astray.

She also disclosed that she had to pay her way through school as she did not attend the conventional school that every other child attends because she had to wait for the regular school goers to close from school so that she could borrow their books and cover up.

Kaffy added that luck smiled on her when she made a world record for herself and country at Amstel Malta World Marathon Dance, by breaking the existing record for the Guinness Book of World Records through dance. And ever since, she has not rested on her oars.