Okotie To Run For President Again 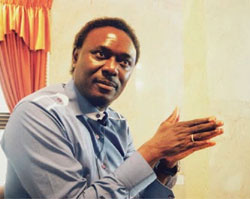 The founder and Head Pastor of Household of God Church International Ministries, Rev. Chris Oktie, has announced his intention to run for president again in 2015.

Rev. Okotie, who had lost in two presidential elections, disclosed in a recent interview that he has a divine instruction to contest for presidency again under the platform of Fresh Democratic Party.

The controversial pastor, who recently acquired two multi-million naira vehicles, first ran for the position against former President Olusegun Obasanjo in 2003 and lost.

He also joined in the 2007 presidential race against the then governor of Katsina State, the late Umaru Musa Yar’Adua, who won the election.

“I will run in 2015, God willing. God spoke to me about my participation in the political process, which was why I took the step in the first place. He has not said anything contrary,” Rev. Okotie said in the interview.

Rev. Okotie claimed that he lost in the previous elections as a result of election malpractices by the ruling party.

He said: “I can sum it up in one word-rigging by the PDP. Even one of the party’s stalwarts, Chief Adeseye Ogunlewe said recently that all elections have always been rigged. So that answers the question. These election questions are inter-related. If they didn’t rig, then I could have won. Apart from election malpractices, the duty of a servant of God is to obey his master when he gives him instructions.”