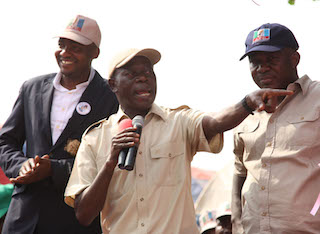 The Peoples Democratic Party (PDP) in Edo State suffered a major setback Sunday as its only Councillor, Mr Peter Akhugie, representing Ogbona, Ward 4, in Etsako Central Local Government Area, the Ward of Chief Dan Orbih, the Party’s Chairman in the state decamped with over 200 of his supporters to the All Progressives Congress (APC).

Ward 4 in Ogbona was the only ward out of the ten in the council area won by the PDP in the April 20, 2013 Local Government election in the Council area.

Receiving the defectors , Governor Adams Oshiomhole said his government would continue to extend development to every nook and cranny of the state irrespective of political divide.

He promised the people of Ogbonna that the state government would immediately deploy the Rapid Response Agency to sink a second borehole in the community to be reticulated to various quarters and homes.

He said: ““I have come not only to welcome Peter into our fold, this Local Government is now 10/10 exactly the same way it is 18/18 in Edo state after my eleciton. And that to recognize that our strength is not in empty rhetoric, making promises that we will not keep. I have come to assure the people of Ogbona that we have done one borehole before, we will do another one. The weapon we have against the PDP is our developmental efforts and they have no answer to it. Each time they plan at night but in the day time God will destroy their plots.

“When you were not with us, we did a borehole and now that you are with us, we will do more. We will continue build and rehabilitate more schools because education is the foundation for our tomorrow. We will make our schools the most beautiful and attractive, in the past, only the children of the rich attended beautiful schools.

“Politics is about the people, it is about development, it is not about sharing rice and sugar during election periods”

“I want to assure Edo people that APC is on a liberation movement and there is no going back what is dead is dead. Now that PDP is pronounced dead in sin, they will not resurrect. We will emphasis development, the right of the child to good schools, the right of the woman to clean water, the right of our people to good roads. Even after my tenure, we will have APC governments that will continue to work for our people, there is no resurrection for PDP.

“While Dan Orbih’s people are moving to a progressive party, he remains in Benin telling lies to people but politically he is finished at home. By the time I am out of government I will be proud to go round Edo state to say this is what I did and my successors on APC platform will build on where we stopped” he stated.

In his remarks, Interim Chairman of the APC, Chief Osaro Idah said the party would soon begin its membership registration and that there would be no hoarding of membership cards but “we will give everybody equal opportunity”

Speaking earlier, Akhugie said he decided to dump the PDP for the APC due to “my conscience because I want the best for my people and not deceit. PDP leaders are using us to make money for themselves rather than for the people but we have said no enough is enough. We want to join Oshiomhole to make our state and council better for our people”.