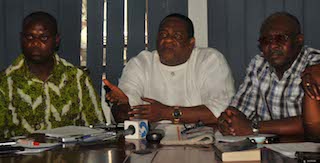 The Ogoni Leaders of Thought, have called for the immediate removal of the Rivers State Commissioner, Mbu Joseph Mbu over what they regarded as an assassination attempt on Senator Magnus Abe, an Ogoni, by the Police at the venue of a rally on Sunday in Port Harcourt.

Rising from an emergency meeting today, the Ogoni Leaders of Thought, made their stand known through Justice Peter Akere, a retired High Court Judge.

The leaders regretted that although President Goodluck Jonathan is a beneficiary of the Ogoni struggle, the ethnic nationality has not benefitted from Jonathan’s presidency, not even the implementation of the United Nations Environmental Programme, UNEP, report on Ogoni land.

The supreme Ogoni group drawn from Khana,Gokana,Tai and Eleme local Government areas of the state threatened that “In the events of acts of impunity by the Police, the Ogoni people will not hesitate to demand the vacation of Nigeria Police from its territory.”

The Police Training College where both the conventional Policemen and the Police Anti-Terrorists Squad are trained is located at Nonwa, in Tai local Government area in Ogoniland.

Justice Peter Akere retired, lamented that what happened to Senator Abe evoked a bitter reminder of the events of its recent past that led to the killing ofthe first generation of Leaders from Ogoni land by the Nigerian state.

Ogoni leaders therefore warned: “That Ogoni people will not stand by and watch a repeat of such dastardly actions that threaten the life an Ogoni person”.

The Ogoni people also warned those he called “the allies of acts impunity in Rivers State since they cannot guarantee our safety in other territories of the state, henceforth all such person remain persona non-grata in Ogoni territory.”

The attack on Senator Abe and the disruption of the botched rally by the Save Rivers Movement, SRM, was at the College of Arts and Science, Rumuola, in Obio-Akpor Local Government Area where Nyesom Wike,the Supervising Minister of Education, hails from and was a two-time Chairman of the Council.

Hon Igo Aguma, a former member of the House of Representatives and Tony Okocha, Chief of Staff of Government House, who escaped Police rubber bullets by whiskers, had accused the Minister of masterminding the disruption of the rally by the Police as the present Rivers State Police Command does his bidding.

In another development, the Senate Committee of Police Affairs, led by its Chairman, Senator Paulinus Igwe, today visited state on a fact-finding tour to investigate the incident that led to the shooting of Senator Abe and the use of teargas canisters to disperse the rally on Sunday.
Senator Igwe told Journalists that the Committee members had met CP Mbu and officers of the state Government.
Recall could be made that when the crisis started, both the Senate Committee on Police, its counterpart in the House of representatives, Minister of Police Affairs and members of the Police Service Commission all visited the state on the acts of impunity of the police Command under Mbu.
Both Houses of the National Assembly had in August 2013, passed resolutions calling on President Goodluck Jonathan to direct the Inspector General Police to re-deploy of Mbu out of the state what they called his unprofessionalism in handling political crisis in the state. Nothing happened, even when Governor Chibuike Amaechi reported Mbu’s alleged human rights abuses to the National Human Rights Commsion,NHRC,Mbu has remained in the state insisting that before any groupd of persons can gather he must obtain Police Permit approved by him.