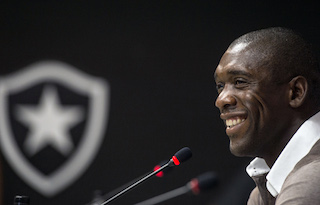 Dutch veteran Clarence Seedorf confirmed on Tuesday he is taking over as coach of AC Milan, replacing Massimiliano Allegri. The seven-times European champions sacked Allegri after a shock weekend loss to Sassuolo and have turned to Seedorf, twice a Champions League winner with the club as a player.

“This experience of a year and a half (with Brazilian side Botafogo) helped me grow and will help me in the next stage of my life — as coach of Milan,” Seedorf said.

Seedorf the first player to have won the Champions League four times and with three different clubs – Ajax in 1995, Real Madrid in 1998 and Milan in 2003 and 2007 is expected to help AC Milan secure a top four position.

As a product of Ajax Youth Academy, Seedorf started his career as a right midfielder for Ajax during the early 1990s. He made his professional debut on 29 November 1992 against Groningen at the age of 16 years and 242 days, making him the youngest debutant for Ajax ever.

With Ajax he won the Super Cup and League titles, as well as help his side to their fourth European Cup trophy, winning the 1994–95 UEFA Champions League defeating Milan in the final. He played a key role in the Champions League final, before being replaced in the 53rd minute by striker Nwankwo Kanu.

In 2012, he joined Botafogo where he retired from football today.