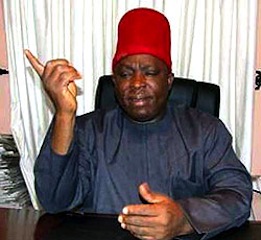 A Nigerian Federal High Court sitting in Abuja on Wednesday dissolved the executive committee of the Chief Victor Umeh-led faction of the All Progressives Grand Alliance (APGA).

Kafarati declared that the tenure of the Umeh-led faction had constitutionally expired and ordered it dissolved forthwith.

The News Agency of Nigeria (NAN) reports that Okwu had sued Umeh and Sani Shinkafi, the faction’s secretary, and sought their removal for outliving their tenure.

The plaintiffs had further averred that Umeh and his faction had constitutionally outlived their tenure and that another party executive committee had been elected to replace it.

Umeh had in a preliminary objection, argued that the court lacked jurisdiction to entertain the case.

He had urged the court to declare him the authentic chairman of the party.

NAN reports that the court had earlier reserved judgment on the matter to Feb. 7, but it, however, gave its verdict on Wednesday.