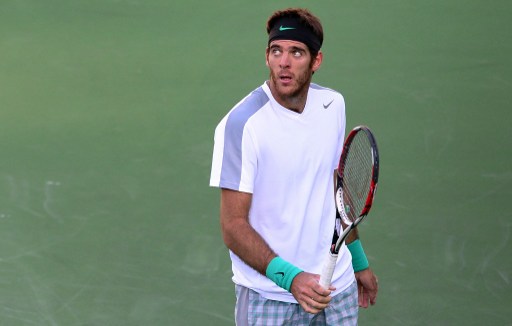 But it was not so easy for world number five, Argentine Juan Martin Del Potro. Stretched to five sets by unseeded Spanish player Roberto Bautista-Agut, Del Potro lost the match 4-6 6-3 5-7 6-4 7-5.

The Argentine took the opening set, with one break in the fifth game enough to take it 6-4.

Back came Bautista-Agut, who broke at the first time of asking in the second set and moved into a 3-0 lead. Again, the solitary break was enough and he held off five break points in the fifth game to take the set 6-3.

A key break at 6-5 in the third set saw Del Potro restore his lead in the match, but again he was pegged back. He lost serve but broke straight back in the fourth, before being broken once more in the ninth, putting the game into a final set.

Again there was just one break in it and it was the Spaniard who managed it in the penultimate game of the match, before holding serve for a stunning win.

Spanish top seed Nadal needed one hour and 53 minutes before extinguishing the 570th-ranked Kokkinakis in their first-ever meeting.

Nadal broke the youngster’s serve five times and saved the three break points against him, but Kokkinakis acquitted himself well in the daunting task of playing the world number one before a full house.

It was just the workout Nadal needed after playing just one set in his opening round when Australian Bernard Tomic retired injured.

“I think I played at a very good level. The serve, that is a very important thing here, was working well,” Nadal said.

“I played a great first set, not many mistakes, serving well, finishing the set playing aggressive with my forehand. Then I stopped a little bit in the second set and played with less intensity.

“I finished the third set playing well again, good forehands down the line, like I did last year, so it’s the way to keep improving.”

Seventeen-time Grand Slam champion Federer, playing away from the main Rod Laver Arena court for the first time in 10 years, was in exquisite touch romping through the opening two sets in 54 minutes.

The Swiss maestro blazed away for 52 winners, six service breaks and 11 aces to control his match with the 99th-ranked Slovenian.

Kavcic could only shake his head and marvel at the brilliance of the four-time Australian Open champion, although he came more into the match in the final set when he forced a tiebreaker.

But Federer played the pressure points the better to finish well on top in front of an adoring Australian crowd.

“It was a good first two sets. I played really aggressive and it worked out,” Federer said. “The third set he was more consistent. He served better.

“In the process, it got closer. I’m happy I got it done in three.”

Murray, a three-time beaten finalist in Melbourne, was down two breaks in the final set against the 267th-ranked Millot, but reeled off the last 23 points to get a double break and serve out for the match.

Former finalist Jo-Wilfried Tsonga also profited from the heat-prompted switch to indoor conditions to breeze past Brazilian Thomaz Bellucci 7-6 (8/6), 6-4, 6-4 and into the last 32.

Japan’s Kei Nishikori mastered Dusan Lajovic to advance to the third round in straight sets.