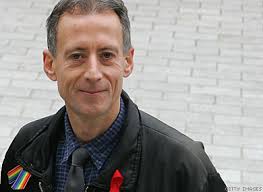 Peter Tatchell: Nigeria's anti-gay law most draconian in the world

It was reported that last week, in a secret decision made without any public announcement, President Goodluck Jonathan of Nigeria signed into law one of the world’s most draconian anti-gay statutes.

Assuming these reports are true, it seems he did not want foreign aid donors and investors – or human rights organisations – to know that the long planned legal crackdown on the lesbian, gay, bisexual, transgender and inter-sex (LGBTI) community had finally become law.

Was this because he felt shame and guilt at giving his approval to such a harsh, illiberal measure? Or because he feared international condemnation?

Whatever the motive for the hush-up, it didn’t hold. The world now knows, thanks to reports in the Nigerian and international media.

Cynics suggest that Goodluck Jonathan was driven by realpolitik. The President has an election in 2015 that he wants to win. As several African leaders have discovered, scapegoating and demonising LGBTI people is an effective, popular tactic. It deflects attention away from unresolved big issues – poverty, terrorism, corruption and ethnic tension – and wins the support of influential religious leaders and a large mass of ill-informed or homophobic voters.

Prior to the President’s signature, the Same Sex Marriage (Prohibition) Bill had previously been passed by both houses of the Nigerian parliament with huge majorities.

Contrary to its title and the way it has been reported by some media, this legislation is about much more than banning same-sex marriages and civil unions. It also outlaws public same-sex affection and LGBTI organisations, events and equality advocacy.

There was, in fact, no demand in Nigeria for equal marriage from LGBTI people. This part of the legislation was concocted without necessity, let alone morality.

“Persons who entered into a same-sex marriage contract or civil union commit an offence and are each liable on conviction to a term of 14 years in prison.”

Bad though this is, much more worrying is the rest of Section 5, which states:

“Any person who registers, operates or participates in gay clubs, societies and organisations or directly or indirectly makes public show of same-sex amorous relationship in Nigeria commits an offence and shall each be liable on conviction to a term of 10 years in prison.”

“A person or group of persons who administers, witnesses, abets or aids the solemnization of a same sex marriage or civil union of supports the registration, operation and sustenance of gay clubs, societies, organizations, processions or meetings in Nigeria commits an offence and is liable on conviction to a term of 10 years imprisonment.”

In others words, participation in, or support of, LGBTI counselling, entertainment, social or campaign groups and events is banned, with a 10 year jail term for violators. Public representations of same-sex relationships in leaflets, books, plays or films carry the same penalty, as does witnessing or assisting a same-sex marriage or civil union. Kissing or holding hands in any public place, and even the mere fact of being openly gay, is now a serious crime for same-sex couples in Nigeria.

This is truly draconian legislation. Even severely repressive homophobic states like Iran and Saudi Arabia don’t have such punitive laws.

The new Nigerian statute deprives the LGBTI community and movement in Nigeria of basic human rights. By so doing, it violates the equality and non-discrimination clause of the Nigerian constitution (Article 42),

It also violates Articles 2 and 3 of the African Charter on Human and People’s Rights, which Nigeria has signed and pledged to uphold.

We can now expect many LGBTI Nigerians to leave the country and resettle abroad. Some will no doubt seek asylum in Europe and the US. Either way, Nigeria will lose many skilled, talented people, to the detriment of its economy.

This law is a tragedy for human rights in Nigeria. It is a backward step that gravely intensifies the already existing harsh anti-gay legislation in Nigeria, which bans homosexuality and punishes violators with a maximum 14-year jail term. This law was originally imposed by the British during the period of colonial rule in the nineteenth century. Although it is not authentically indigenous, it was retained after Nigeria gained its independence.

Commenting on the legislation, Yemisi Ilesanmi, coordinator of the campaign group, Nigerian LGBTIs in the Diaspora Against Anti-Same-Sex Laws, said:

“This legislation is a clear attempt to crush the lesbian, gay, bisexual, transgender and inter-sex (LGBTI) community in Nigeria. The further criminalisation of same-sex relations is hateful and a violation of human rights.

“The law will jail Nigerians who participate in LGBTI organisations and will make human rights advocacy by LGBTI groups impossible.

“It is shameful that many Nigerian legislators are so myopic that they compared homosexuality to paedophilia during the voting on the Bill.

“The criminalising of an oppressed minority because of their sexual orientation is indeed an outrage, a gross violation of human rights. Nigeria is sliding fast into a despotic state,” she said.

A despotic state indeed. The legislation is symptomatic of wider attacks on human rights and the rule of law in Nigeria. It symbolises the many abuses that prevail in Nigeria and which all Nigerians – LGBTI and straight – have a common interest in overturning.