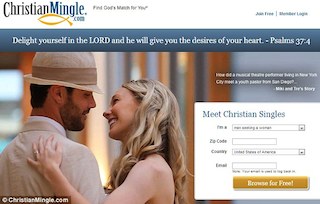 A 66-year-old American woman looking for love online ended up with a broken heart and a depleted bank account when she lost $300,000 to a fake Nigerian suitor on a Christian dating site.

The San Jose divorcee met the Nigerian on ChristianMingle.com falsely claiming to be an Irish citizen ‘David Holmes’, according to the Santa Clara District Attorney’s Office.

‘Holmes’ said he worked on a Scottish oil rig, and his profile picture turned out to be a picture of a male model downloaded from the internet.

The two never met in person, but talked over the phone and ‘Holmes’ even sent the woman flowers.

After wiring him an additional $200,000 to a bank in Turkey, the woman got suspicious and informed the DA’s office.

Cherie Bourland of the fraud unit called the bank in Turkey and was successfully able to freeze the funds before Holmes’ associate Wisdom Onokpite showed up to withdraw the money, according to CBS San Francisco.

Onokpite was arrested by the Turkish National Police on suspicion of committing fraud.

The DA’s office traced ‘Holmes’ to Nigeria, but he remains free.

While the woman was able to get her $200,000 back, Ms Bourland says there’s just a ‘1 per cent’ chance she’ll recover the over $300,000 because ‘it’s just impossible to track down’ and federal authorities won’t investigate losses below $1million.

Ms Bourland says reports of lost money on dating sites has been on the rise, especially among the elderly since ‘studies show the ability to make financial decisions is the first to be affected by aging.’
‘You get the love drug in you and you end up getting duped,’ she told the San Jose Mercury News.

Dating site ChristianMingle.com’s slogan is “Find God’s Match for You.” But the match the San Jose divorcee found was anything but holy.