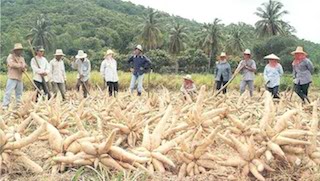 The Ogun state Government, western Nigeria on Saturday said that the Malaysian Government would soon commence the massive cultivation of rice and cassava in the state.

The Commissioner for Agriculture, Mrs Ronke Sokefun, made this known when she spoke to newsmen in Abeokuta on Saturday.

Sokefun said that the Malaysia Ministry of Agriculture and Agro-Based Industry would be the arrow head for the projects.

She said the Malaysians would acquire 500 hectares of farmlands in different parts of the state for the project.

According to her, the projects are evidence that the partnership with the Malaysian government has started yielding dividends.

The commissioner said the ministry would embark on the rehabilitation of abattoirs and slaughter slabs throughout the state.

She said that the rehabilitation would help the state to meet international standards, adding that plans were on the way to establish a fish farm estate.

“All these projects cut across the three senatorial districts of the state. No effort will be spared to complete and get the best out of them this year,’’ she said.

Sokefun called on stakeholders to cooperate with the government in its efforts at achieving food security and youth empowerment through the different agricultural programmes.