Oshiomhole has my vote for Presidency, says Fashola 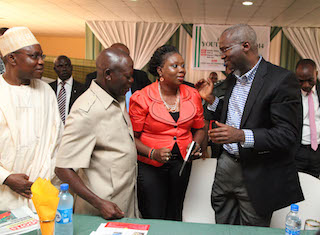 Governor Babatunde Fashola of Lagos State says he will support his Edo State counterpart, Comrade Adams Oshiomhole, should he decide to take a shot at the Presudency.

Fashola said this Saturday morning in Benin City at a Youth Summit organised by the Edo State Government, with the theme “Nigeria’s Centenary: Defining the Issues and Setting Agenda for the Future of our Youths.”

He said, “If Governor Adams Oshiomhole decides to run as President of this country, he will have my vote. He is the kind of leader that Nigeria needs. I say that because, I have spent five memorable years of my life in Benin City as an undergraduate and as a Youth Corper and they are very fond memories that I hold dear in my heart today.

“I am always looking forward to coming here each time I am invited. The excitement to come here is at an all time high. Since my brother assumed office as your governor, because every time that I come here, for all the right reasons, Benin City has not remained the same. It has changed positively and continues to change.

“On my way here, I drove past my former office on Sapele Road and clearly the place has transformed. And the Airport Road is now wider. I know what Ring Road used to be like and Akpakpava road. It is nice to know that tourism is back. Flights are regular and you have done it because you have allowed yourselves to be led by a man who can inspire you to action. And I don’t think that anybody can claim the credit for what has happened here if not the people of Edo State.”

In his remarks, Governor Adams Oshiomhole of Edo State appealed to the youths not to give up on the nation, adding that the future of the country is in their hands as foreigners can assist but cannot solve the nation’s problems.

He argued that every nation has its own history and that Nigeria has come to stay.

“As a people what we should think about is how we get our people properly managed such that the wealth of this great country is expressed in the quality of life of the citizen. How do we address the paradox of a nation so rich and yet its people getting poorer?

“How do we raise the issue of how the promise of democracy can be fully realised, if the federal government continues to pocket 52 percent and ask all the 36 states and the FCT to share 26 percent and the rest to be shared by 774 Local Government Areas.

“I do not think it is helpful for us to question whether Nigeria is a reality. So I ask you as young people to recognise that every country has its own share of problems and none of those problems can be resolved because the people have perfected the act of lamentation.

“There is no nation that doesn’t have problems. It is only Nigerians that can build Nigeria. We can’t keep crying over what we have lost yesterday. But we can resolve to do things differently tomorrow.

He therefore appealed to the youths not to judge the future of Nigeria by the failure of the past leaders and even the failings of the current leaders.

Also speaking, Barrister Festus Keyamo called for the participation of youths in the democratic process, noting that “youths in Edo State have shown how to protect one man one vote. The practice must be entrenched beyond Edo State.”

Other speakers included Miss Toyosi Akerele who said youths should be inspired to take up the challenge of being leaders of the country, adding “when things happen and we continue to agonise without organizing for a change, it’s like expecting a picture in a calendar to shed tears.”

On his part, former TUC President, Comrade Peter Esele, urged the youths to brace up to the challenge of transforming the country to a better place for all.

A Human Right Activist, Dr. Joe Okei-Odumakin urged the youths not to be silent about the ills in the society.

NLC President, Comrade Abdulwaheed Omar who was represented by Alhaji Kiri Mohammed, noted that since Oshiomhole became the Governor of Edo, the state has witnessed remarkable transformation.