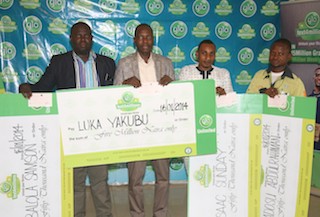 L-R: The winner of N5million in the ongoing Glo “text4millions”promo, Luka Yakubu, a Pastor with the Redeemed Christian Church of God (second from left), flanked by Babalola Samson, a transporter, Isaac Sunday, a businessman, and Oladosu Abdulrahman, a youth corps member who won N50,000 each in the promo during the prize presentation ceremony held in Abuja on Thursday.

Luka Yakubu, a Redeemed Christian Church of God pastor and fifteen other lucky subscribers have won prizes in the ongoing Season 4 of the Glo “text4millions” promo have been presented with their cheques at a special prize presentation ceremony held in Abuja.

Other winners who got N50,000 are Bakare Ganiyu, a transporter, Isaac Sunday, a businessman, Oladosu Abdulrahman, a youth corps member, Otevia Kelvin, a civil servant, Ikwen Emmanuel, a porter, Obaji Solomon, a businessman, Oyelami Taofeek, a carpenter and Ugwuanyi Ikechukwu, a businessman.

Yakubu thanked Globacom for making it possible for his family to be so mightily blessed early in the New Year. “I am very grateful to Glo for blessing me and my family in such a surprising way. N5million can transform a hundred families, so I will make sure I create a special place for Glo when I set up my business which will be the first food warehouse in West Africa,” he said.

Ikwen Emmanuel, a porter at the Protea Hotel in Asokoro who won N50,000 in the promo was also ecstatic about being one of the lucky winners. “Glo might think that this is little money, but believe me, it is going to make a difference. I only played for one day before I was called to collect this money and I hope to win again”, he stated.

For Anyanwu Simon, a fabrics dealer who had won N1milion in a previous Glo promo, winning the sum of N50,000 again is a clear indication that Glo keeps its promises and rewards its subscribers. “Glo promises and never fails. This is the second time I’m winning as I collected N1million on August 10, 2013 in Lagos. Glo is the number one network and I know I will win again”, he said.

Speaking about the promo during the prize presentation, Globacom’s Divisional Director, Lorenzo Gomez said that Glo has a history of rewarding its subscribers with cash prizes and celebrating them. “Season 4 of the Glo “text4millions” promo is already delivering on its promise and will continue to give out huge rewards to loyal subscribers who choose to participate in the promo”, he said.

Aimed at rewarding customer loyalty while economically transforming the lives of subscribers on the Glo network, the fourth season of the Glo “text4millions” promo offers prizes ranging from N50,000 daily to N5 million weekly and a grand prize of 15 million at the end of the promo.